Founded in 2011, IPA Day is a universal movement created to unite the voices of craft beer enthusiasts, bloggers and brewers worldwide, using social media as the common arena for connecting the conversation.

IPA Day is not the brainchild of a corporate marketing machine, nor is it meant to serve any particular beer brand. IPA Day is opportunity for all breweries, bloggers, businesses and consumers to connect and share their love of craft beer. It is an opportunity for the entire craft beer culture to combine forces and advocate craft beer through increased education and global awareness

Okay, I'll play along. The IPA, or India Pale Ale, is indeed one my favorite styles of beer. I typically gravitate to the house IPA first when I visit a new brewpub. It's a fair bet that the style has probably been reviewed on these Musings more than any other.

So, far be it from me to stand in the way of a "universal movement." After an afternoon at the range, I was ready for a good beer anyway. After looking through the beer fridge for something suitable, I opted for a Starr Hill Northern Lights IPA, one of my favorite Virginia beers. After all, not only is August 1st IPA Day, it also marks the start of Virginia Craft Beer Month.

Look through the #IPAday hashtag on Twitter to see how craft beer fans are marking the day. 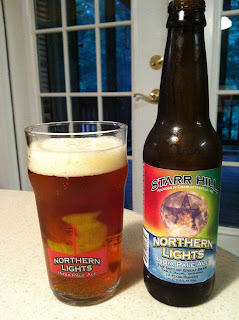