It was still dark when the alarm went off Sunday morning. I could hear the sound of heavy rain falling, and I was sorely tempted to roll over and go back to sleep. But, I was signed up for the North Mountain Practical Shooters match, and if they were going to hold it, I was going to be there. When I arrived at the "apple orchard," the rain was light but steady. Fortunately, by the time we were shooting, the rainfall was intermittent, but frequent enough to require the targets remain covered with plastic bags.

In deference to the expected wet weather, five simple, but quite fun, stages were set up. Movement on the wet grass was kept to a minimum with the stages all shot from single or multiple shooting boxes. The first stage had three paper targets, backed or partially covered by no-shoots, and two US Poppers. It was a good, quick stage to get warmed up on. Next we moved to Stage 2, which consisted of 3 shooting boxes. From the first box, engage three paper and 2 Pepper Poppers; move to the next box and knock down three round plates; the final shooting position had three Pepper Poppers and two paper targets. 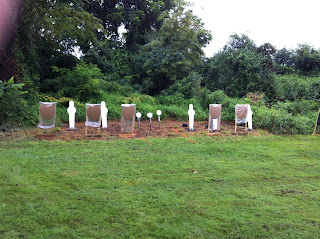 Strong-hand and weak-hand shooting came into play on Stage 3. The first string required one round on each of four targets, a mandatory reload, followed by four strong-hand only shots. String 2, from a closer box was a repeat with weak-hand shots after the reload. I had my only miss of the match when I pushed my last strong-hand only shot low, and my only D hit was on this stage as well.

Stage 4 was the largest course of the match. Starting from a box in the center, the shooter saw three paper targets and one US Popper to engage. One of the paper targets presented only the small "head" area. The shooter then moved to either end to enter another box, in my case the left side. There were four targets there, two on either side of a barricade. Then it was quick sprint to the opposite end and four more targets with a wall acting as a vision barrier between the two pairs. 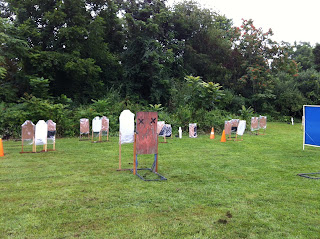 The last stage was the Classifier CM 06-05, "Fluffy's Revenge 2." I felt I shot this one at a good tempo. Alas, I had Alpha-Charlie hits on all three paper targets, but needed no makeup shots on the steel. It wasn't my highest classifier score, but should still work out a bit above my current average.

Overall, I was very pleased with my shooting this day. I've been getting in some good practice lately, focusing on a harder support-hand grip and I think it paid off with better accuracy in this match. The event was a lot of fun and we finished shooting in about 2 1/2 hours. The cool temperature and cloud cover made for pleasant shooting.

It's been quite a while since I've been able to get to a North Mountain match. In fact, I last shot there in September 2012. After shooting this weekend, I'm reminded how much fun the matches are. I need to get back soon.