An Oasis of Sunshine For Shooting

As I headed west on Sunday morning for the November North Mountain Practical Shooters match I was wondering if I'd be able to find the targets once I arrived. The fog was dense, making driving difficult. As I crossed the mountains, suddenly the sky cleared and the sun shown brightly. Ironically, this change happened at the part of the drive where I usually run into rain, even on sunny day. The weather at the range sunny and warm for most of the morning.

The match directors put together a fun seven stage event, including four classifier stages. All the classifiers were newly added to the USPSA ranking system this year. But first up, was a non-classifier steel stage featuring a Texas Star and 5 small square plates arranged in a wall made from a wooden pallet. In an interesting twist, the shooting box was divided diagonally, and the shooter was required to move between sections between the star and the plates. It wasn't a large movement, but just enough to distract. 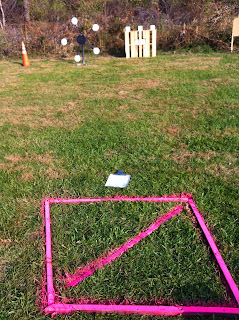 The next two stages were classifiers, and both required a break from the "2 on each" mindset we're so used to. "The Roscoe Rattle" consisted of two strings of fire. The first string required 6 hits on the center target, and the second string called for 6 hits on the outer targets with a mandatory reload between. "Too Close For Comfort," required just a single shot on each of 5 targets, one with a deceptively close head shot, followed by a mandatory reload and one more shot on each target. I started out too fast on this one and got my only miss of the match on the first target.

After those "stand and shoot" stages, it was time for the only stage requiring substantial movement. After shooting a plate rack, you had to run forward, up a slight incline to engage four paper targets set low to the ground. I found it interesting that some shooters opted to take one procedural penalty and shoot all the targets from the first position, rather than take the time for the 7 yard or so run. 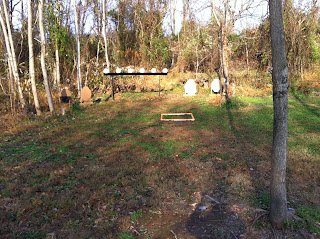 We returned to the classifiers with "Disaster Factor." Six targets were arranged in three vertical pairs with no-shoots in the center. Starting facing up range, the shooter had to turn and put two shots on each target of either the bottom or top row, perform a mandatory reload and engage the remaining targets. "Double Deal 2" saw the shooter sitting with elbows on the table, holding two "playing cards," and the loaded gun set on the table. There were three paper and two mini-popper targets to be engaged. 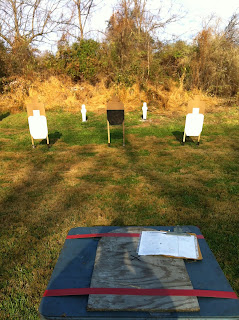 The last stage I shot was another quick stage with just two paper and three steel targets. The steel targets were a classic pepper popper, a mini-popper and a 6 inch falling plate that were lined up behind one another. For added challenge, the shooting box was exceptionally small which made a standard shooting stance difficult.

All seven stages were completed in less than three hours. The new classifier stages are fun and challenging, as were the rest of the stages. Amazingly, soon after I left the range, the clouds and fog returned, making for a wet drive home. Indeed, the rest of the day was overcast. If I had not gone to the match I wouldn't have seen any sunshine at all on Sunday, so the brief weather change to a sunny morning was an added bonus. I was happy with my shooting, having just one miss and one no-shoot hit. The match was a lot of fun, and a great way to end the season of shooting at North Mountain.