It was good to get out to the range for some practice this week. Most of my shooting the past couple of months have been at matches. Colleen has been hinting at wanting to do Dot Torture, since it's been over a year since we last did the drill. I accidentally (honest) left them on the printer when we got ready to head to the range, but my dear wife reminded me to go back upstairs and get them.

I had decided I wanted to shoot my carry weapon the next time I got to the range, instead of the gun I typically shoot for fun. I expected the smaller gun would make the shots on the 2 inch circles all the more challenging. I needn't have worried.

We set up at the recommended 3 yards, took a deep breath and started the drill. I dropped my first shot on Dot 2, but grouped the next four very nicely. To have that miss so early in the drill was frustrating, but I had to shake it off. The rest of the drill went well, with a few shots near the edges but still scoring. I probably could have slowed down just a bit for tighter groups, but I find it hard to do slow, carefully aimed fire, even in a non-timed drill. I even made it through the strong and weak hand-only sections without any misses. At the end my score was a gratifying 49/50. 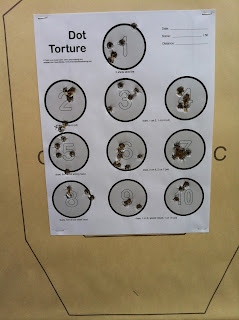 To some extent, getting that close to a perfect score is frustrating. But it's gratifying to shoot well with a gun I don't shoot as often as I should. I was also reminded how much fun the little SIG P239 is to shoot. This was a good practice session and the drill fit well with the range's new prohibition on "rapid" shooting.

I wonder how it would go over if I put the target on my office door...