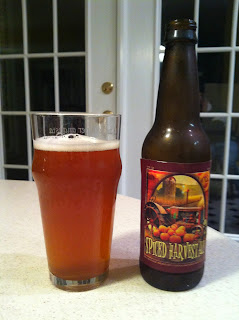 After a morning of shooting and an early dinner Sunday, I was relaxing with a book when I had the urge for a beer. I stood for a while in front of the open beer fridge looking for inspiration. So many beers, and nothing was tempting me, and then I spied the bottle of Spiced Harvest Ale that was sent a couple months back by the folks at Fordham Brewing.

The beer pours a slightly hazy amber color with a very thin but persistent white head. Sticking my nose in the glass I was immediately pleased with the smells. "This could be good," I thought, it doesn't smell like potpourri and I detected some pumpkin as well. Taking a sip, there's cinnamon, nutmeg, brown sugar; all present but not overwhelming. And pumpkin. Underneath it all there is the distinct flavor of pumpkin. The finish adds a bit of sweetness with the lingering spices.

Perhaps I should have tried this one sooner. I typically grow quickly tired of pumpkin and spiced beers, so much so that I rarely keep them on hand, preferring to try them one-off at the pub, or the occasional brewery review sample. The Fordham Brewing contribution to the Fall "spiced beer" lineup is one that I wouldn't mind drinking again.