I received an email update last week from Blue & Gray Brewing that announced the availability of their seasonal Spiced Winter Ale. To make it even more tempting, they were serving a special of St Louis Style ribs with black bean salad and cole slaw. I succumbed to the email temptation and made a date with Colleen for dinner Friday evening.

The Spiced Winter Ale pours an opaque reddish-brown color with a thin beige head. The Blue & Gray seasonal is one of the most heavily spiced beers I've had, and it even shows in the appearance; the beer actually looks thick with spices. The spice aroma is strong and I could pick it up across the table as Colleen took our requisite social media and blog photo. 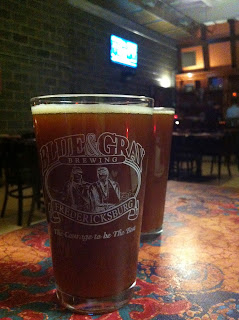 The flavor was equally strong in "winter spice," as expected. Orange zest, cardamon, allspice, cinnamon all come into play. It's almost overwhelming, but definitely invoking of the traditional holiday scents and flavors. There are some bitter citrus notes under all that spice as well. A drying, bitter finish wraps up the flavor profile.

Soon, my ribs arrived and my glass of Spiced Winter Ale was empty. To accompany the meal I opted for a glass of Stonewall Stout. The stout and ribs combo was doubly appropriate as Friday was also International Stout Day, whatever that means. The mild, dry stout, with its dark espresso and bitter chocolate notes seemed a perfect choice with the meaty half rack of smoky ribs. Extra sauce and extra napkins rounded out the meal.

I'm no fan of the cold, dark, dreary days of Winter, but I do look forward sights, smells and tastes of the beers of the season. The wintery meal at Blue & Gray was a first inkling of the flavors to come with the approach of cold weather.