Surprisingly, this isn't a post about the 0bama administration, although I have little trouble applying the label to the current leadership in Washington. No, we're talking about this flight of Stone Brewing Company Arrogant Bastard varieties I enjoyed recently at Capital House. The flight consisted of "standard" and barrel-aged versions of Arrogant Bastard and Double Bastard ales. It was interesting to be able to compare the affects of the aging against non-aged versions. 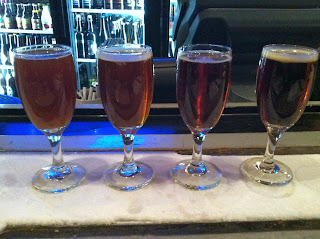 First up, starting from the right side of the photo, was Stone Arrogant Bastard Ale. This 7.2% ABV American Strong Ale is one that I've enjoyed many times in the past. The strong sweet malt base is equaled by piney and bitter hops in a full-bodied beer. Saving a sip of the Arrogant Bastard for comparison I started on the OAKED Arrogant Bastard Ale. The non-aged version, and exceptional beer in it's own right, pales in comparison to the oaked version. Woody smoke, oak and a hint of alcohol enhance the rich beer. As I extolled the flavor in my 4 ounce sample Colleen simply smiled in agreement, as she had skipped the flight and decided right away on a pint of the Oaked Arrogant Bastard Ale.

Next I moved on to the Double Bastard pairing. Stone Double Bastard Ale is the big brother of Arrogant Bastard, dry hopped and ramped up to 11.2% ABV. The beer is sweeter and more syrupy, but that is well-matched by the boost in citrus hoppiness. The finish is bitter and a little boozy. There's some dark fruit that comes out more so than in the Arrogant Bastard beers. The final beer in the flight was a special Double Bastard (2012 vintage) aged in red wine barrels. This beer had a unique flavor background of astringent red wine. As with the Arrogant Bastard pairing above, the barrel aging seems to takes bitter edge off the ale, adding a smooth garnish to the flavors. For both pairs, I preferred the aged versions over the base, but there was nothing lacking in any of the four beers. Overall, the OAKED Arrogant Bastard Ale was my favorite of the bunch. I might just have to pick up a couple bottles next time I'm in my local beer shop.

I decided to finish up the evening with a glass of a seasonal beer fromy Brouwerij Corsendonk from Belgium. Corsendonk Christmas Ale is a Belgian Strong Dark Ale with rich flavors of raison, molasses, brown sugar, as well as some mild spices. The mouthfeel is smooth with hints of Belgian yeast, and a dry finish. The flavor profile was muted in comparison to the Stone beers I had already enjoyed. If I had planned the evening's beers in advance, I probably would have had the Corsendonk Christmas Ale first. Plenty of good food and numerous excellent beers made for quite an enjoyable Friday evening on the town.