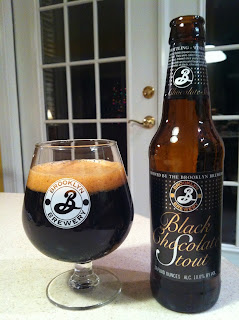 Brooklyn Brewery's Black Chocolate Stout is one of those beers we buy every year, put in the basement, and forget about. When it's time to enjoy a dark, rich Russian Imperial Stout, we'll dig out an old bottle and enjoy the effects of aging. Such was the case recently when we heard about the passing of Mikhail Kalashnikov, the creator of the AK-47. (And that's how I get to muse about beer and guns in the same post.*)

"Checkered Flag" joined us as we were inspired to raise a glass of a Russian Imperial Stout. (It's the closest to "Russian" I had on hand.) We have bottles of the stout going back at least 7 years, but I didn't dig too deep for this tasting, and opened a couple of 2012 bottles. The beer poured an opaque black with a thick beige head. The foam quickly dropped to a thin ring. The aroma was dark cocoa and coffee. Sipping the beer, over a discussion of guns and defense, we enjoyed the rich dark chocolate and espresso flavors. Even after just a year in the cellar, the flavors were blended and smooth, with very little taste influence from the 10% ABV. The finish left a bittersweet chocolate aftertaste and was very dry.

It was just this past weekend that we picked up some of this year's bottling of Brooklyn Black Chocolate Stout. They've been added to the stash in the basement for enjoyment in the years to come. Meanwhile, I'm looking forward to enjoying more vintage bottles in the coming Winter months.

*Regarding Mikhail Kalashnikov, it's been quite entertaining to read some of the disparaging comments on other blogs regarding the weapon designer's death, even from pro-gun folks. I have no love of Communism or it's supporters, but there's little denying Kalashnikov's influence on the world. The AK-47 was developed to defend the creator's homeland. (Against the Nazi's no less.) Kalashnikov once stated, "I invented it for the protection of the Motherland. I have no regrets and bear no responsibility for how politicians have used it." Blaming an inanimate object, or it's designer, for subsequent uses by evil men, is ludicrous. Only a deceitful, political opportunist would consider such a thing.