After our enjoyable evening at Capital Ale House, Colleen and I returned home last Friday and realized we had almost missed our traditional drink of Samichlaus Bier on the Feast of St. Nicholas. The beer's name means "Santa Claus" in the Swiss-German dialect of Zürich. Brewed only on December 6 of each year, by Brauerei Schloss Eggenberg in Austria, the beer is aged for almost a year and released in time for the following year's feast day. Not to be deterred by the late hour, I dusted off a 2007 bottle and poured a nightcap. 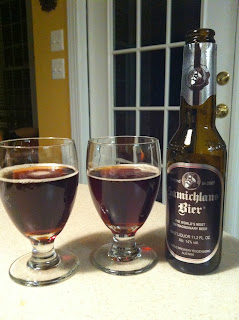 As soon as I removed the cap from the bottle I was struck by the strong sherry-like aroma of dark fruit, molasses, and alcohol. The beer had a translucent reddish-brown color and no head to speak of, although there was some tingling carbonation in the mouthfeel. The flavor is strong, and rich with dark plums and raisons, sweetened ever so slightly by molasses and brown sugar notes. Fresh Samichlaus can be syrupy and sweet, however aging seems to mitigate the cloying sweetness.

While I sipped this amazing 14% ABV lager, I kept muttering to myself, 'Oh, this is so good." While not a beer I could drink every night, it is certainly a treat worthy of honoring the good St. Nicholas. Eventually our glasses were emptied and it was time to enjoy a good night's sleep.