After my final evening working the conference, a coworker and I walked over to one of DC's oldest beer bars, The Big Hunt, for an early dinner. By this time in my week, I was on the verge of exhaustion, but I didn't want to pass up the opportunity to visit this infamous pub. Stepping into the dark room, our IDs were checked, and we made our way to one of the few open tables. I had some trouble reading the beer list (did I mention it was dark?) but I had looked up the menu online, so had some idea of my choices. Despite the crowd, and just one server working the tables, service during our stay was prompt and efficient.

I started out with the featured cask selection, The Movement, from DC's 3 Stars Brewing. Served in a highball glass, this Pale Ale exhibited fresh hopped citrus aromas. The flavor had a "green" edge to it, with a citrus rind bitterness. A bit of syrup-like sweetness came through in the end. The serving was the proper temperature and carbonation expected from a casked beer, and my glass was quickly emptied.

I had previously seen the tapping of William's Winter Warmer from Baltimore's Pratt Street Ale House announced on the pub's Twitter feed, and that was my next selection. The aroma of this Strong Ale was full of dark fruit; plums and raisons, along with dark malts. The taste continued along those same lines. Dark fruit, licorice, vanilla, with roasted malts and a bit of alcohol in the finish. I wasn't disappointed.

The food menu is somewhat limited at The Big Hunt. I was reminded that this was a "bar." In Virginia, there are no bars, only restaurants that serve alcohol. (Okay, I give DC a win in that one category.) I didn't feel like waiting until the pizza happy hour started, so I ordered a spicy buffalo chicken sandwich. The pairing with the William's Winter Warmer may not have been the best choice, but both the food and the beer were tasty.

The long week catching up with both of us, we called it an early evening, opting to not stay around for the free burlesque show advertised for later that evening. Although I had just a short visit, I enjoyed Big Hunt, and it definitely lived up to its reputation.

I was glad I got to visit a couple of good beer stops, in spite of a busy week. I suspect I'll be returning to the same DC hotel in the future. The Big Hunt, and The Black Squirrel, are both on my "do again" list. 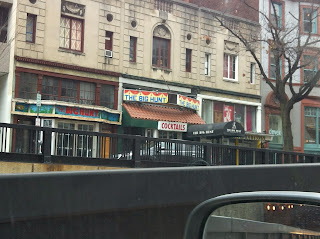 A water main break the morning of my departure caused me to be stuck in traffic right in front of The Big Hunt.