Mornings on the Range

I was looking through my notes, and realized that I had not been to the outdoor range to shoot my pistol for a couple of months. Shooting has been limited to a few USPSA matches, the indoor range, and some shotgun or rifle time. So, during my holiday staycation, I've been making an effort to get out to the range in the morning, before the crowds show up. 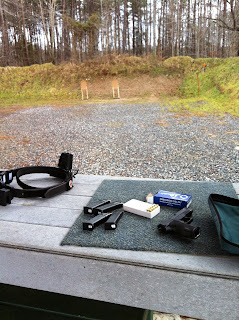 When I headed out Monday morning, it was slightly overcast, with a temperature of 45°. The park was empty when I arrived so I grabbed the larger bay and spent most of the time shooting on the move and doing reloading drills. I even snuck in some "rapid fire." (I wish I had thought to bring along those evil steel targets.) It was a very fun and relaxing morning. Interestingly, by the time I was finishing, I heard some rifle fire starting up, but still no pistol shooters had showed up.

Well, that was so much fun, I decided to do it again Tuesday morning. What a difference a day makes! The temperature was about 15 degrees cooler, although the sun was out. Well, sort of. Oddly, half the bay was in deep shadow, while the sun shone on the other half —despite it being the same time of day as yesterday. 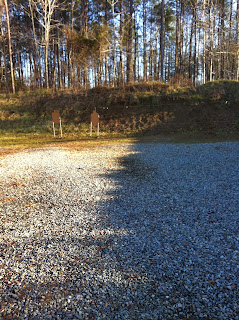 I restricted my activities to the sunny side. Even so, the cool temperature and cold fingers made loading mags a chore. Most of the morning's fun was spent shooting at longer distances while stationary. The main reason for that was to make the brass pickup chore quicker. By the time I finished, I was glad I was able to gather brass quickly and get home to some to some hot coffee!

I don't know what the upcoming mornings will hold. I do know it's expected to be much cooler later this week. There's even the possibility of a few snow showers, but I've shot in the snow many times. I do know that we're going to need more ammo. :-)

Of course, the best thing about shooting first thing in the morning is that it leaves the rest of the day open for enjoying some good craft beer. And that's the other focus of this "staycation"!