It's Always 5:00 at BadWolf Brewing

This past weekend, Colleen and I finally made it back to MadWolf Brewing in Manassas. We had visited prior to their opening back in June, but busy life kept getting in the way of a return visit. After fighting the weekend traffic, we arrived at the brewery Saturday afternoon, but first made a stop at Virginia Arms, located in the same shopping plaza. After some quick window shopping over firearms it was time to hit the brewery.

The small tasting room was filled with folks enjoying local beer. After getting a rundown of the six beers that were on tap, we decided that the proper course of action would be to start out with a flight. The 6 ounce servings were well-suited to sharing, while still providing enough volume to get a feel for the beer. We grabbed one end of the retro Pac-Man game table for a place to sit our glasses. After the two hour drive I didn't mind standing for a bit. Colleen and I shared a laugh and memory, recalling that we met over a similar arcade table at a local pub, circa 1980. 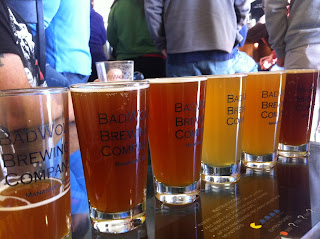 The six beers in the flight, in the order we tasted, were Grodammit, a smoky wheat beer, Simcoe Warrior IPA, ESB, UnKolsch, Imperial SMASH Pilsner, and Ryon Orthros, a Belgian Dubbel with apricot. We enjoyed each and every one of them, and a few especially stood out. The Groddammit exhibited noticeable but not overwhelming smoke, with the smoky and wheat flavors well-balanced. The Simcoe Warrior IPA was the hoppiest of the beers. The Simcoe hop citrus bitterness was bold enough to keep your attention, but not so much as to overwhelm. Finally, the Imperial SMASH ("Single Malt and Single Hop") was a mildly bitter pilsner, one that seemed to be a popular choice among the crowd.

After reviewing the beers in the flight, we decided to get some food, and full pints of a couple of our favorites. BadWolf has a free popcorn machine on site, but doesn't serve other food. No worries though, there are plenty of nearby places to get takeout, which you are welcome to enjoy in the brewery. I went next door to Adam's Pizza and placed an order that was delivered to our table at BadWolf in short time. To go with our pizza Colleen ordered a pint of Grodammit, while I opted for the Simcoe Warrior IPA.

As we ate, there was activity at the large chalkboard that lists the beer selections. The Ryon Orthos keg was kicked, and was replaced by a beer from the "coming soon" side of the board, Festivus Ale. Naturally, I had to try a small glass of that one too. Described as an Amber Ale with spices, it reminded me a lot of Anchor Our Special Christmas Ale. The dark reddish-brown ale had subtle "Christmas spices" and a pleasing caramel malt base. Earlier in our visit, I would have definitely gone for a full pint of this. I suspect this one will be a hit at the pub and will go fast. (Why didn't I get a growler to go?)

We enjoyed each of the beers we tried. They were fresh, tasty, and served at just the right temperature. It was obvious that local folks were very much enjoying the local, fresh beer. Despite the constant crowds, the service was friendly and quick. We never lacked for a beer, and our table was kept clean and clear of empty glasses. The atmosphere was relaxed and everyone seemed to be enjoying the afternoon.

The wall clock at the brewery is stopped at a few minutes past 5 o'clock. As the saying goes, "It's 5:00 somewhere," and that somewhere is BadWolf Brewing. I'm looking forward to going back soon.