It's been a week since I bemoaned the recent "all work and no play" trend, but we finally got in a visit to one of our local pubs to enjoy some good beer and food. As our friend Checkered Flag recently lamented, "We need to get back into our fun routine." To that end, Wednesday evening we headed over to Park Lane Tavern for their Breckenridge Vanilla Porter, on nitro, Steal the Glass event.

It's been a while since we visited Park Lane, and I was pleased to see they've expanded their "rotating taps" list, now with 5 beers, plus a cask selection. As much as I was looking forward to the nitro Porter, I was tempted by some of the other selections. Well, maybe I'll have a second beer...

The Breckinridge Vanilla Porter poured a deep chocolate color with a think mocha head, with the attractive nitro carbonation slowing rising to the top. This was a very handsome looking beer. I could hardly restrain myself while Colleen grabbed a photo. The aroma is very faint, with vanilla and milk chocolate notes. The flavor is mainly sweet milk-rich coffee and vanilla. The mouthfeel was extremely smooth and creamy. The beer goes down easily and quickly. At just 4.7% ABV that's not a problem though. 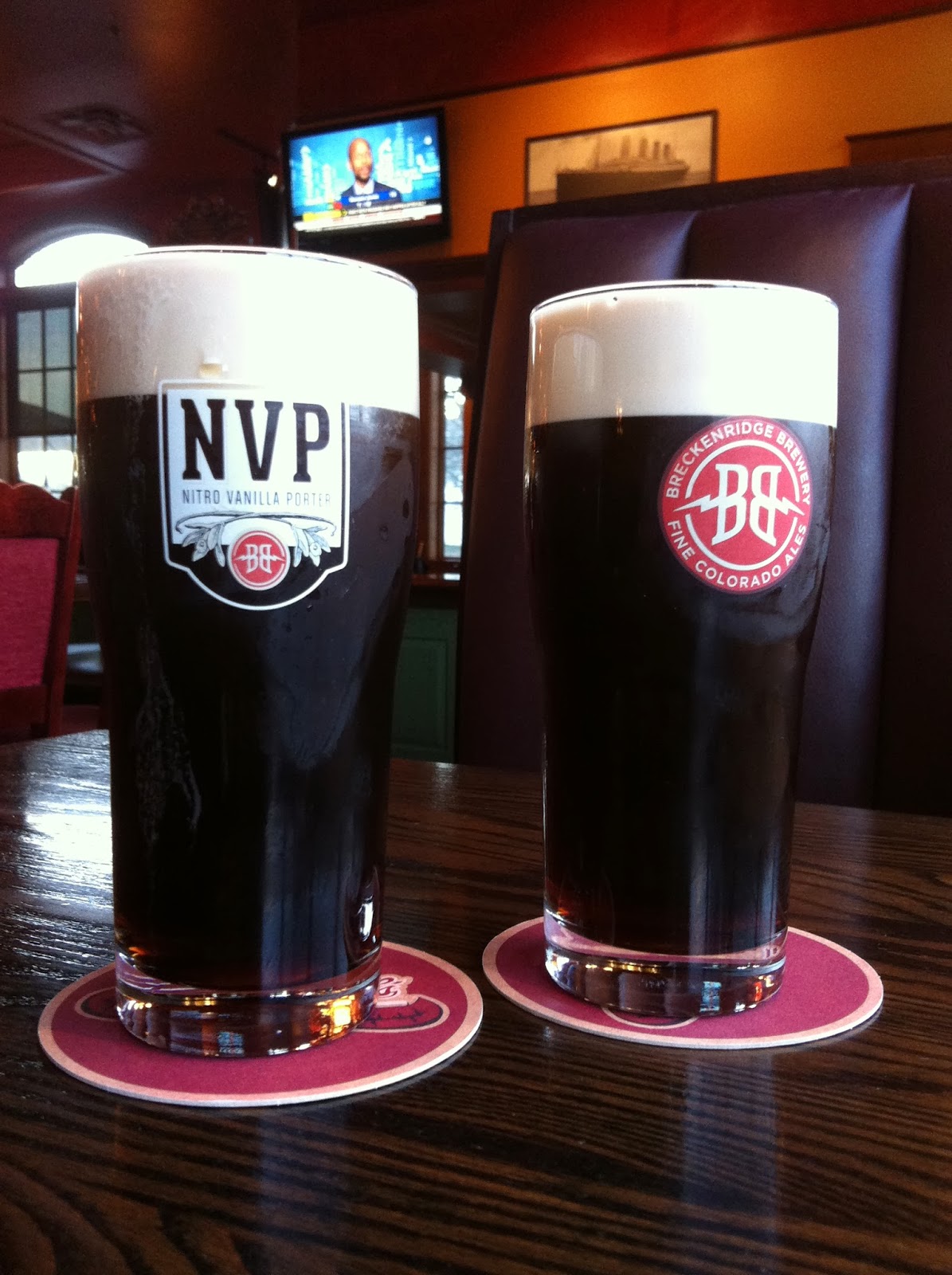 I've had this popular beer before, both from a bottle and a standard tap. I've found it a touch too sweet for my tastes typically. It's not a beer I could drink more than one of in a sitting. It seemed to me however the flavor this time was less cloying that I recall. Perhaps that's the effect of the nitro, but in any case it was quite tasty and indeed. If there weren't other beers to try, I would have had another!

In the food area, I had my mind set on Fish & Chips for dinner, planning to combine it with the nitro-poured Porter for hint of Ireland. (I've sworn off Guinness in the U.S. after enjoying it in Ireleand.) However, Park Lane was featuring a Wild Game Bangers and Mash entrée that was especially tempting. The bangers were made with elk and venison. So I switched food plans and went that dish. I'm glad I did. The meat was very tasty, as was the accompanying "mash" and other vegetables.

To go along the Bangers & Mash I ordered a pint of Anderson Valley Winter Solstice Seasonal Ale. This reddish-copper colored ale had a rich caramel malt flavor enhanced with subtle spices. The spiced ale was a very nice compliment to the herbs and spices in the sausage. Colleen and Checkered Flag both ordered glasses of the cask selection, New Holland The Poet. Poured into a large snifter, the from-the-cask serving came out at just the right temperature. (Sadly, I've accepted the fact that most beers served in America are set out too cold and require patience before enjoying.) I stole a couple few many sips from Colleen's glass. This Oatmeal Stout was rich in roasted coffee and copious oatmeal, along with a hint of citrus hops in the background. I may have to order this one for myself next time.

We had a very enjoyable evening at Park Lane. We're frequent, but not regular visitors to the pub, but it seemed to me they've stepped up their beer game a notch, and my entrée was one of the better meals I've enjoyed there. Oh yea, those infamous "kilts"? They seem to be gone. I realize the "mini" kilts on the girls were a gimmick, but neither those nor the usually-too-long kilts on the guys were very authentic. The black pants on most of the employees we saw this week gave a much more professional look. I can't say I will miss the "kilts." I do realize from reading the comments on the Facebook that I'm probably in the minority with that opinion. I look forward to visiting again and seeing what happens next.