After Mass on Sunday, we drove out to Orange, VA for brunch at The Light Well. Coincidently, this was the same place Colleen and I enjoyed lunch on Mother's Day. The Light Well offers breakfast and lunch foods, along with a small but decent craft beer menu. We've enjoyed everything we've had there. This visit I opted to forgo beer with my lunch, saving that for my planned afternoon time to be spent sitting on the screened porch.

For my sittin' time, I grabbed a couple of unusual beers that had been waiting in the beer fridge, both from Flying Dog Brewery. Both beers were from the Brewhouse Rarities series, and seemed ideal for the warm, but pleasant outdoor time. The first beer was Berliner Weisse. The beer pours a bright golden color with a fizzy carbonation. The flavor has a refreshing tartness along with some earthy wheat backbone. I very much enjoyed this one. 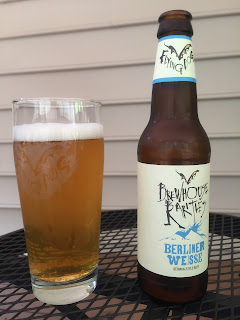 Next I poured Mint Julep Ale. I'd been sitting on this one for a while. Other than then occasional York Peppermint Pattie, I am not a fan of mint. It's a long-running battle in my family regarding the appropriateness of mint to flavor chocolate ice cream. (I'm against it.) Flying Dog's Mint Julep Ale has a faint sweet bourbon aroma. The flavor brings notes of sweet honey, along with a mild yeastiness. The mint comes through in the flavor more than the aroma. It's a pleasing herbal, leafy mint flavor. This bottle I shared with Colleen since I knew my enjoyment of the mint would be limited. 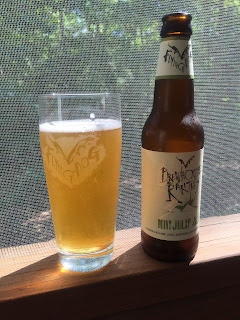 After my beers, I came inside to find Colleen in the kitchen busily baking. She said something about a "Raspberry and Lemon Cake" to enjoy after the steaks planned for dinner. I decided I should save some room, and delay any further beers until after the evening's meals.