"Tough. And exhausting." Those were my first words when I was asked how last weekend's West Virginia State IDPA match went. It was a long afternoon of shooting eleven challenging but fun stages. The Tier Three match was held at the Peacemaker National Training Center. This was my first sanctioned IDPA match so I expected a challenge, and was not disappointed in that regard.

While all were fun, a few of the stages offered especially memorable challenges. "Hug the Wall" simulated a terrorist attack in a hotel. After pushing over a popper that activated a quick up and down target, you moved to a "hallway" to engage more targets. In two positions you had to put your body flat against the wall, either your front or backside depending on the hand used to shoot, with the support hand on the wall. It was an unusual position, shooting into a narrow target area. I shot strong-hand only so had my back against the wall at one position, and my front in the second. Here's an instance where a "mature'' belly was a benefit and gave me some space away from the wall. 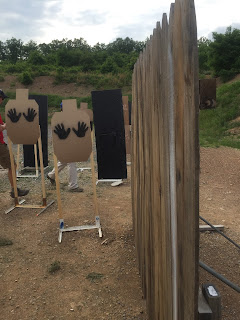 "Save the Hostages" was unique in that the non-threat targets were moved around between each shooter. The stage had two arrays of three shootable targets and two non-threats. You didn't know which targets were non-threats until you come upon the target groups.

Two stages made use of an actual crashed airplane. For "Down in the Desert" we started seated in the plane, gun loaded with six rounds on the glare shield. The first three targets were engaged in tactical sequence. After a reload, we yanked on a microphone cable which activated a pop up target and a very fast swinger. Part two of the scenario involved moving a bag from the cargo area of the plane to the tail, while engaging targets over the aircraft's body, while on the move. The stage finished with more targets from the cover of the tail section. 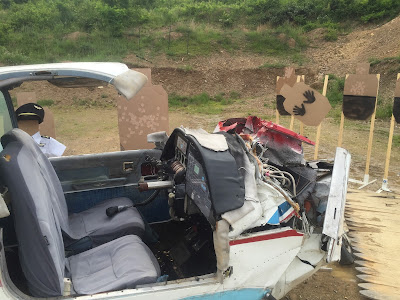 There were a couple fast stages mixed in with the scenario stages. "Turn Fast" had two targets on the 180° line at 7 yards, and a center target at 9 yards. You started facing one side target, shooting two body and one head shot, turned 180° to the second target, then back 90° to the center. The second string was the same but requiring three shots strong-hand only to the body of each target. The mental challenge to the drill was not shooting the center target as you swung past it; a challenge some shooters failed. "Cody's Sidestep Drill" was even faster, with targets at 3 and 5.2 yards. Stepping to the side at the start, you engaged the targets with 2 body and one head each. String two required three body shots strong-hand only to each. It was a fun "go fast or go home" type drill.

I found the stage "Hit the Ground" to be especially fun. You started prone, with the gun on the ground. There were six targets to be engaged through a picket fence, all while lying with your stomach flat on the ground. There were three levels of priority which meant a lot of shuffling your body back and forth. Being the next to last stage of the day, I kind of wanted to remain lying down after I finished shooting! 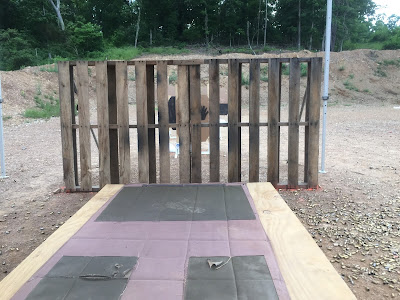 The stage at which we ended the day was called "Fishing Trip Trouble." You sat in a "boat" which was suspended by cables allowing it to sway freely in all directions. Your gun was placed at your feet inside a tackle box. The shooter pulled on the anchor at the side, holding the boat to the side. Letting go of that started the boat swinging, while leaning over to pick up the gun added to the motion. The eight targets were place downrange with varying amounts of hard cover. It was a fun stage, and finished my match with a chance to sit down! 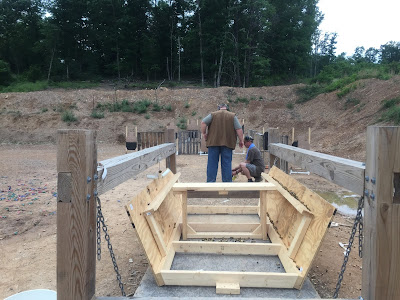 I opted to shoot the match in the afternoon, not realizing just how late that afternoon session would go. We started shooting after 2:00PM and finished after 8:00PM. There were actually twelve stages planned for the match. One stage, which looked fun and was shot among the trees, had been thrown out due to inconsistent running in the earlier squads. It was available to shoot for fun. By the time my squad got to it the daylight was already fading and we still had two stages to go, so we opted to forgo it. Disappointing, but I was glad to finish the match before dark. By the time I got home around 10:30PM, that cold beer was exceptionally refreshing!

The match was much longer and more challenging than the local, monthly matches I've been shooting. However, I was very happy for the chance to shoot it. I had more misses and hit more non-threats than I would have liked, but enjoyed the sanctioned match experience. At the end of it all, I finished 66th out of 156, and 12th out of 23 shooters in my division and classification. It wasn't my best match, but I'm not too disappointed given the level of competition. This was also the first time I visited the Peacemaker facility. The range is a little over two hours away from my home and in the future I think I'll consider attending some of the monthly IDPA matches held there.