The June IDPA match at Cavalier held this past Saturday was a super fun match with summer activity themed stage designs. The pleasant, warm weather added to the enjoyment and made for quite a pleasant morning.

The first stage consisted of two separate strings of fire. We started standing at the grill, “cooking” a steak, with our strong hand on a spatula. There were four targets to be engaged in tactical sequence. For the second string, we took a seat at the table and placed the gun in a lidded box. For this string we shot four more targets, near to far, while seated. The last target of the string was well-hidden behind a barrel requiring a hard lean to hit it. 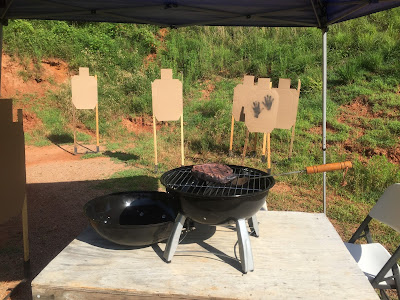 Moving to the next stage, we found a long clothesline with laundry strung across the bay. Starting with our hands on a laundry basket, when then move across the bay shooting at target down range. Moving around the clothes line, we then moved down range engaging targets from various cover positions. 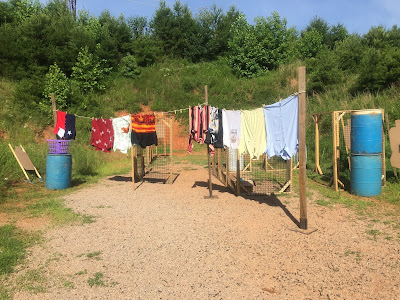 Next up was a run ’n gun type stage. The movement was more like a USPSA stage than what is usually seen in an IDPA match, but still a fun challenge. The seven targets were arranged behind walls, requiring the shooter to cross back and forth into the corners as he progressed down range.

The last stage was the most challenging in my opinion, but perhaps also the most fun. We started standing behind a lawn mower. Giving the mower a hard shove forward activated a very fast, disappearing up-down target, along with a swinger target. The challenge was to push the mower, then draw the gun and get two hits on the disappearing target before it vanished. Following the two moving targets there were five more targets to be engaged.

Our squad consisted of just seven shooters, so we moved quickly through the match. In addition, the other morning squad was started two stages over so we never ran up against them. Thanks to superb organization, and no delays between stages, all five strings in the four stages were shot in less than two hours.

I felt good about how I shot, and had a great time to boot! Apparently, many other shooters had a good day as well. When the results were posted I was further down in the overall order than I had expected. But, that’s fine too; the only person I really compete with is myself. Nonetheless, it was still a very enjoyable morning at the range. I made it home in time to enjoy lunch with my family and then continue the weekend-long garage cleanup project.