While I was in Longmont, CO for work, a coworker recommended I check out Longs Peak Pub & Taphouse. Waking from a short after-work nap I headed over to the brewhouse. The pub offers both outdoor patio seating and spacious interior space. Naturally, I opted to sit at the bar.

The restaurant is part of the Mountain Sun Pubs & Breweries group, and serves the complete lineup of Mountain Sun Beers, as well as a few guest taps. Immediately after taking my seat I was greeted and given the lay of the land. The employees at Longs Peak share in all duties. That was made evident as the service was attentive and my glass (water or beer) was never left wanting. The staff is extremely friendly and welcoming.

There are around twenty Mountain Sun beers on tap, so my decision process was tough. I mentioned to one of the folks behind the bar that I liked hoppy ales, and immediately found sample of three IPAs in front of me. The pub serves half pints as well as full pints, which is a welcome option when looking to try several beers. I opted to start out with a half pint of Resinous Rye. Brewed with Simcoe hops and malted rye, the seasonal beer had pleasing resinous and citrus notes. Less sweet than some IPAs, with a nice bitter citrus flavor, the small serving was quickly consumed. Judging from comments from employees stopping by for conversation, Resinous Rye is quite popular among the staff too. 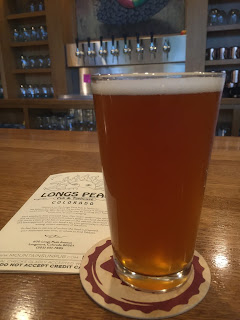 My food decision was no less difficult than the beer choice. I finally opted for Tim’s Blackened Chicken Quesadilla. The quesadilla is made with with jack and cheddar cheeses, spinach, tomato, diced jalapeños, blackened chicken and garnished with salsa, guacamole and sour cream. The blackened chicken has a very robust, spicy flavor. The plate is as colorful as it is generous in size. After my initial half pint of Resinous Rye, I ordered a half pint of Newman's Altbier. Pouring an attractive reddish-brown color with a thick white head, the beer has toasted and caramel malts with a pleasant earthiness to the flavor. Only slightly sweet with a smooth toffee finish, I was struck by the rich flavor of the beer. I've tried numerous altbiers over the years, but I don't recall one I enjoyed as much.

About the time I finished the half pint of Newman's Altbier, the skies outside opened up and the rain came hard. Being in an unfamiliar city, driving an unfamiliar rental car, the wisest course of action seemed to be to wait it out. So I ordered a pint of Resinous Rye and nursed it until the rain slowed.

It's worth noting that Mountain Sun pubs are cash-only establishments. However, there are ATMs on site if you happen to be short of greenbacks. I really enjoyed the beer, the food, and the friendly staff at Longs Peak Pub. It's definitely on my list of places to revisit when I next get back to Longmont.