It's that time of year in Virginia when cool mornings give way to warm afternoons. It complicates preparing for a match; vest or fleece jacket for cover garment, long pants or short, t-shirt or flannel shirt? At Saturday's Rivanna IDPA match, it appeared I was not the only one consternated over clothing. I saw everything from short pants to flannel jackets and wool caps. I opted for a fleece jacket, which worked for the first two stages, was too warm for the third, but thankfully the fourth stage would require no cover. Skipping Postponing some planned chores, I left the house in the early dawn and arrived at the range to still chilly temps and an overcast sky. 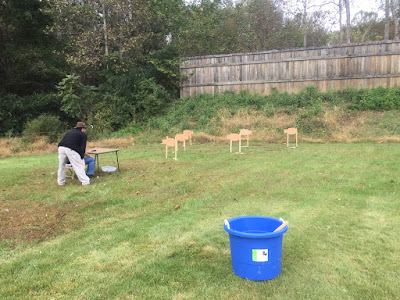 The first stage had us shooting at "wild pigs," represented by sideways targets with the -3 zone removed. We shot while seated with the empty gun and all reloads on the table. The targets required two body shots each, in tactical priority, followed by a headshot on each in any order. The last headshot took me to slide lock, and I called the shot good and opted to not reload for another shot. Unfortunately the shot was called outside the perf and was ruled a miss.

Next up was a challenging stage, shot kneeling, that required some very tight shots between non-threats. At the start, we drew the gun and dropped to a kneeling position behind a barrel. Getting all the shots in required leaning from side to side. I remarked that my front sight post was nearly as wide as the opening between the targets! Few folks that I saw shot the stage clean, myself included.

The next stage was the only one requiring movement. We started facing three targets which were engaged in tactical sequence. Then moving towards some stacked barrels, there were two targets to be engaged with two body and one head shot each. These targets were partially block by a non-threat target. Finally we moved to a third position for three more tactical sequence targets. 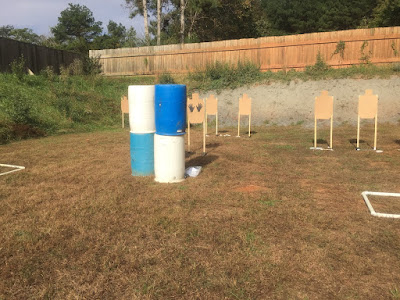 It was on the last stage where I hoped my regular practice shooting one-handed would pay off. There were three targets, two of which were partially obscured by a non-threat. We shot two strings of six shots, first strong hand only, then support hand only. Alas, I nicked the non-threat, just breaking the perf, even though the hit was also in the -0 zone on the threat target.

The match, as always was both fun and challenging. The non-threat targets provided an extra element of risk to the match. In fact when reviewing the results, I noticed that only 10 of the 42 shooters got through the match without hitting at least one non-threat. The "leader board" seemed about the same as usual, but I did place a bit lower than I typically do, though I was still generally happy with my shooting.

The crowd seemed smaller than usual, and the stages ran quickly, which boded well for getting home to spend time with my son who was home from college for the weekend.