Last weekend, the monthly Cavalier IDPA match took on a seasonal theme and the stages were based on the Walking Dead TV show. Since I've never watched the show, much of the meaning behind the props was lost on me. (Me to the SO: "Does the 'W' on the head of the target mean something special?") But that didn't reduce the fun to be had.

Gloves were a last minute addition to my range bag in the morning. I certainly needed them while waiting for the match to start. The temperature quickly rose as the morning progressed; I shot the first few stages wearing a fleece jacket, before switching to a vest for the final stages. All in all, it was just about perfect shooting weather.

The folks putting on the match went all out, adding Walking Dead-based signage, body parts, and blood throughout the eight stages of the match. More importantly, the stages were a blast to shoot. Several of the bays held stages providing two courses of fire. We took extra mags to the line, and shot both courses of fire at once. This really sped up the match and kept things moving. 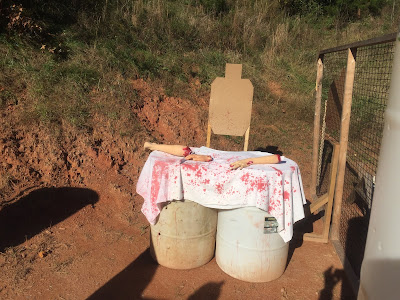 The first stage our squad shot was made up of two quick strings, which provided a quick warm up for the more complex courses of fire to come. For the first, we started holding a pull behind “stretcher” and engaged three nearby targets in tactical sequence. Moving to the next position, we knelt by a "bloody body” with the gun on the ground, then engaged four targets from kneeling. It was on the third target that I had the thought, “You really should look at the sights.”  A -3 hit on one target would be my worse shot of the day.

Another interesting stage took place at “Carl’s Garage.” There were also two courses of fire to be shot here. The first consisted of 16 t-shirt covered targets that all required one head shot. We started with a six target group, before engaging two more by shooting under a low opening. There were more targets to be found moving down range. I managed to bump my head on the overhang during the walkthrough and once while pasting targets. Fortunately during my run, I cleared it safely. Moving to the back of the stage we ran another quick course. 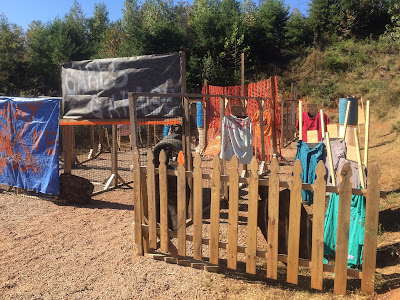 For another fun course, we started with our gun in a tool bag, and holding a crowbar, which was “impaled" on a bloody target, while facing up range. I joked to the SO that in “real life” I’d never leave my gun off-body in my tool box — ignoring the idea I’d likely not be impaling zombies with crowbars either. At the back section of the bay there was another course with multiple hallways to negotiate.

The bay labeled “Terminous” also presented us with two fun courses. For the first, we started in the “boxcar”. This stage included a couple of long shots on falling steel in addition to the paper targets placed amongst the walls. Moving to the back of the bay we entered a “butcher shop” complete with dismembered body parts. 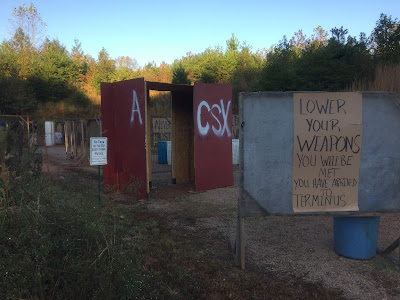 Lately I’ve noticed I’ve been shooting fairly accurately, but slow. I made a conscience effort to speed up a bit for this match, and I think it paid off. With just 10 points down for the match, I missed placing first in SSP Sharpshooter by .18 of a second. Any -3 hit is frustrating, and that -3 hit (-1.5 seconds) on the second stage was made all the more painful — although just one more -0 hit on any target likely would have changed the finish order.

The matches at Cavalier typically feature interesting and challenging stages with lots of props and plenty of movement while shooting. This month's match was no exception and was extremely fun to shoot. It was quite obvious that a lot of planning went into the preparation of the match. The match officials kept things moving, and we finished all eight stages by about 12:30.

The thing about putting off chores at home to shoot, is that they are still waiting when you get home. After the match it was time to strap on the backpack blower and work on the leaves in the yard. A morning of shooting, and an afternoon of yard work made the evening beer taste all that much better.

I’ve posted a few more pictures from the match here.