What better way to cap off a pleasant Sunday, indeed the weekend, than with some good beer? After a couple range trips the past week, I spent time Sunday afternoon doing some overdue gun cleaning. Then it was time for the reward of good beer. Colleen and I haven't been to Spencer Devon in quite a while, so that was our choice for this Sunday outing.

There were a number of new beers on the menu since our last visit, so we took time to peruse the beer list before deciding. I eventually settled on Market Square Kettle-Sour IPA. This is an interesting citrusy IPA with a funky, tart accent. It actually took a few sips for my palate to adjust, but then the beer went down quit smoothly, and quickly. Colleen ordered another unique beer, the La Guerre Rouge Saison. I hadn't paid attention to the description before she ordered, and was surprised to see the dark red liquid placed before her. In truth, I initially thought our beers had been switched. I stole more than one sip from her glass. 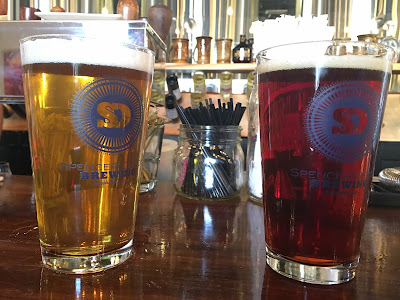 Of course we ate too. After I finished a hearty bowl of shrimp & grits, and Colleen enjoyed a mushroom and spinach omelet, we decided to try out a couple more of the new Spencer Devon beers. This time Snead's Squash Harvest Ale, brewed with locally grown squash for me, and Hazel Run Dubbel for Colleen. The Harvest Ale had an unusual, but enjoyable roasted and nutty flavor.

As we were finishing, owner Shawn came by to chat. We were talking about Spencer Devon's win of a Bronze medal at the Great American Beer Festival this year. The medal is not yet on display, but Shawn asked. "Do you want to see it?" Of course, we did. 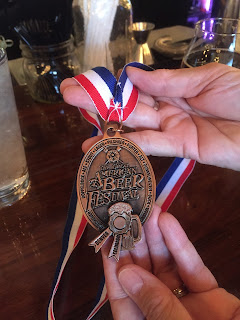 Shawn is rightly proud of Spencer Devon's recognition at GABF. This is the first time a Fredericksburg area brewery has garnered such prestigious recognition. The kudos are well-deserved and we look forward to more acclaim for local beers as the craft beer scene continues to grow in the region.