This past weekend Colleen and I enjoyed a fun mini-vacation on the Delaware shore. The impetus for the trip was for me to shoot the Delaware State IDPA Championship Match held at the Bridgeville Rifle & Pistol Club. Our weekend started Friday evening with good food and beer at a Seaford, DE restaurant with some friends from Virginia who were also shooting the match. I shot the match on Saturday morning, then Colleen and I spent the rest of the weekend sightseeing. 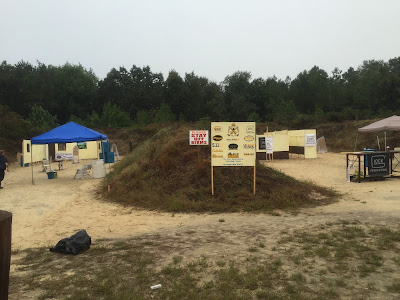 The Level 4 match was put on by an amazingly dedicated staff. Due to weeklong inclement and destructive weather, the match volunteers had to rebuild the match stages several times before the event. Originally planned for eleven stages, the final match consisted of ten stages. One stage had to be pulled due to range conditions, while a few others were modified to adapt to flooded or unusable range bays. Despite the extra effort and frustrating conditions, the SOs and staff remained cheerful and friendly.

A light mist prevailed for most of the morning, but the moderate temperature and overcast skies made for generally pleasant shooting weather. A quick wipe down of the front of my glasses was required before shooting, and the targets had to be bagged for much of the match, but otherwise the inclement weather had little affect on the shooting, at least for the Saturday morning squads.

The first stage, aptly called “First Shots” was a single-target standards stage, and was set up in each bay. Every shooter shot the exact same stage to start the match. I thought that was an interesting concept, providing an even playing field for the “warm up." The rest of stages had a home invasion scenario as a common theme. From start to finish I found the stage scenarios to be interesting and well thought out.

I was very impressed with the club’s attention to detail at this weekend’s match. They worked hard to make it “real." After the standards stage, the first scenario stage I shot, "Lindbergh’s Revenge" was set in a bedroom where your kids were being held hostage. The scene was complete with a bed and dresser, and a bad guy on a ladder in the window. When you opened the door, a non-threat target ran towards you, passing in front of the threat targets. 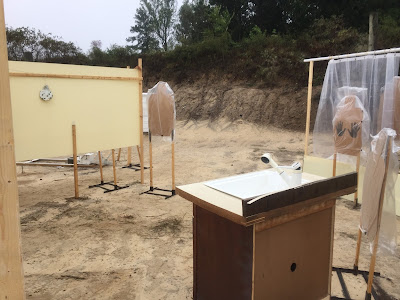 “Come Clean” was based in a bathroom scenario. After engaging targets while moving towards the door, the rest was shot from the doorway. The threats were "hiding" in the shower and behind a countertop. When the match storyline turned to a basement setting in “Basement Scene", the attention to detail was continued; a fake water heater included PC pipes running from the top, and even a length of electrical cable. 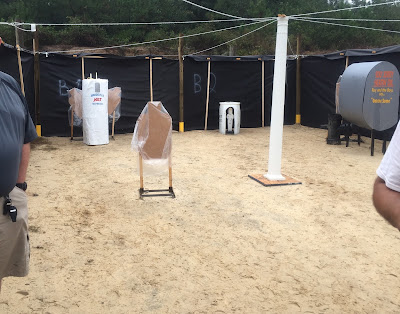 “Poolside” was an exceptionally elaborate, and fun, stage. Starting seated at a table, we shot two close threats, then turned to engage a steel activator. Leaving the table, we passed a well-stocked backyard “bar” to engage a mover. Passing a swimming pool and clothesline, we moved through a narrow opening lined with live plants, through which another threat was engaged. More threats where found through a window. 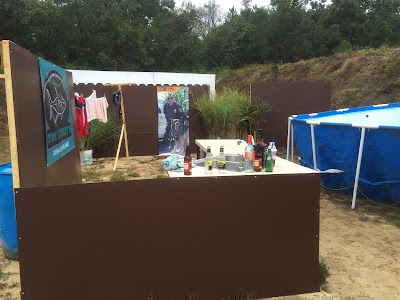 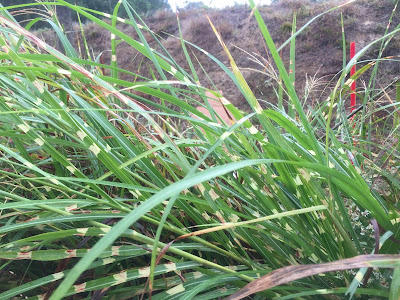 The stage “Children of the Corn” was shot mostly on the move. It was one of several stages that required careful attention to the timing of reloads to avoid running dry in the open. “Dirty Pond Water” had us engaging threats on the move while crossing a wooden suspension bridge. That the bridge provided passage over actual water was a coincidence created by days of heavy rain. “Burglar Has Friends” started with some SHO shooting while backing up. The stage targets included a couple of moving targets, one of which was a swinger target fronted by an also-swinging non-threat target.

Two stages involved automobiles in driveway scenarios. In “Homecoming” we started with our hand on an open car door, and the gun loaded with just 6 rounds. Closing the door, we drew the weapon and engaged a single target until slide lock. After a reload there were more targets shot from cover and on the move. In “Driveway Assault” we started out holding a heavy bag over a stomp pad. Dropping the bag activated a drop turner, which required a fast draw to get at least two shots on it before it disappeared. Next there were four targets behind “windows” at about 20 yards to be engaged, two from each side at the back of an SUV. Moving forward we found one target to be engaged on the move, then two more targets shot from cover around the front of the vehicle. I enjoyed both of these stages very much. 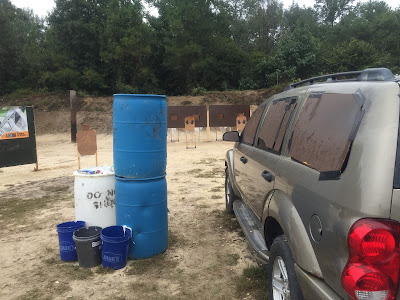 From start to finish, the match ran quite smoothly, at least from the competitors’ point of view. We even had a “squad mom” assigned to keep us organized. Debbie kept us informed on the shooting order, verified our scores, and made sure we knew where to go next.

There were plenty of door prizes and giveaways at checkin as well. I drew a raffle ticket for a set of custom molded ear plugs donated by Hearing Protection Company. I sat for the molds before the match and picked the finished product up when I was done shooting. I can’t wait to try them out.

A tasty lunch was also included in the match fee. A local Knights of Columbus council served a grilled chicken meal for all shooters. That was a nice touch after a long morning of shooting.

After getting back to the hotel for a quick shower, Colleen and I headed over to Lewes, DE for a late lunch. After lunch and a beer, we stopped in for a treat at a local ice cream shop. We had visited Lewes some 20 years ago and we drove around a bit reminiscing and looking for places we visited.

We started our Sunday with Mass at a local church and then went for a big, old fashioned diner breakfast. Checking out of the hotel, we drove back toward the shore. We then spent several hours driving around the Prime Hook National Wildlife Refuge. Due to the recent rains, there was a lot of high water, and many of the roadside pullouts were underwater. However, the high water also meant that many of the wading birds were standing at the road’s edge for easy viewing. In fact, often the birds were standing directly in the road. Instead of dodging deer like we do had home, the obstacles at Prime Hook were Great Blue Herons and Egrets.

I enjoyed the match, and indeed the entire weekend, immensely. Overall, I was very pleased with my shooting. There was a few low points; I hit two non-threat targets in the match, and earned a PE when I reshot an ineligible target on "Dirty Pond Water." But in the end, there was much to be happy about.  I finished up 30th out of 118 shooters overall, with 34 total points down. Breaking the score down, in the SSP division I was 12th of 51 and 10th of 43 in my classification (SS). In the combined Division/SS ranking, it works out to 5th of 16 in SSP SS. Not earth shattering but I’m pleased. That’s not too shabby for an old guy with bad eyes and knees.

Although we’ve gone way for some football weekends and college visits recently, Colleen and I were happy to enjoy a fun mini-vacation weekend. Perhaps I’ll find some other matches in interesting places we can visit in the future. 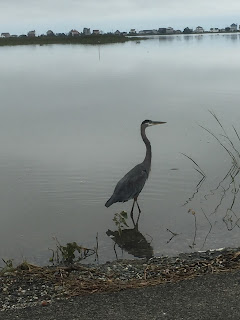