After a vacation week of too much food and too much a lot of beer, I rose early Sunday morning to shoot the monthly IDPA match at the Cavalier Rifle and Pistol Club. Despite still being somewhat worn out from the past week, I was looking forward to shooting and visiting with friends.

Four stages were set up for the quick match on this Memorial weekend. Our squad started on stage 3, which was a most challenging and interesting stage. As luck would have it, I was the first shooter on this stage, which provided quite the "warm up." Twelve targets were arranged at the berm, with a variety of hard cover, as well as four non-threats, among them. All targets required 2 hits. A shooting area was defined by four barrels. The course of fire started with the unloaded gun and a magazine on the shooter's choice of the back barrels, another magazine on the other back barrel, and the third mag on one of the front barrels. The directions were to shoot any six targets, moving to pick up reloads as needed. After shooting six targets, the shooter stopped where ever his last shot was fired and holstered the gun with any remaining rounds. Then the timer was restarted for a second string for the remaining targets. 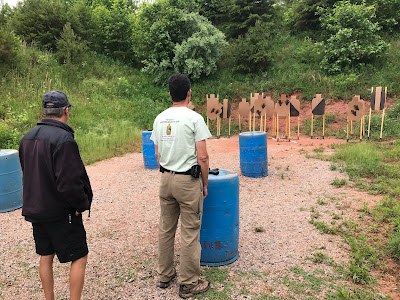 The challenge was to plan where your reloads would occur, and where you would shoot the sixth target and start the second string. Failing to stop after the first six targets, and shooting all 12 targets in a single string would be a Flagrant Penalty, which caught a couple shooters. Some folks had complex plans for the stage, but I opted to keep it simple and shoot the first six targets left to right. I grabbed the reload from the right barrel and moved forward to shoot my sixth target. For the second string I shot the last six right to left, which required minimal movement for the last target.

After shooting I saw I had one miss from hitting hard cover and one hit on a non-threat. I also heard a lot of points down being called. I honestly didn't pay too much attention, just being happy I shot all the targets and followed my plan, such that it was. It wasn't the scores were posted later that evening I saw I was 17 points down on the stage. The number wasn't the highest for the stage, but it would have likely gotten in my head if I had realized it during the match. Despite my lackluster performance I thought it was a most clever stage design.

Next up was a stage with two strings of fire. The first string used the first three targets in the stage which simply required body shots and one head shot on each. There was the added challenge as the match was using the new smaller -0 head zone targets. After finishing that string we prepared to run the rest of the course. This meant shooting targets that required some moderate leans around cover, including a couple long shots on falling steel. I was -2 for the stage, which I think included a -1 on the new head target.

Stage 1 of the match was quick course of fire that had us shooting through narrow openings between barrels. The first target was close and in the open, shot as we stepped into the barrel "fort." Six more targets, near and far, were to be shot only through the gaps in the stacked barrels. The trick on the stage was manipulating the gun into position between openings and finding the limited view of each target. Again, another -2 stage for me. 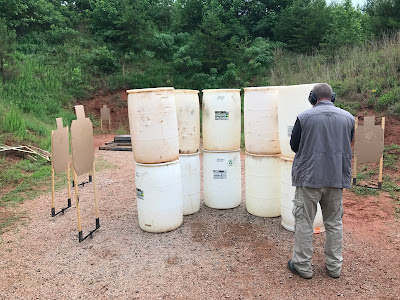 During the final stage of the match, with about half the squad left to shoot, the rain finally came. The targets were bagged starting with the shooter before me. Just my luck. The stage started with the unloaded gun and all magazines on a table. At the start we retrieved mags and loaded the gun. The course had us weaving through walls to find targets behind cover at several shooting positions. Finally, I finished a stage with -0 points down.

The match ran quickly and without any delays. I thought all of the stages were well designed and fun to shoot. In the end I finished 9th of 33 overall, and 2nd of 9 in SSP. Finishing 21 points down and one HNT was disappointing but in no way diminished my enjoyment of the match. We were done shooting in about 2 1/2 hours and I headed home only slightly wet.

My afternoon plans of cutting the grass and other yard chores were cancelled due to the unexpected rain. But that did mean I could enjoy my post-match beer that much sooner.

A few more pictures from the match are posted on Flickr.