Last Saturday, I made the drive north on I-95 to shoot the IDPA match held at Fairfax Rod & Gun Club. It had been raining for several days prior, and the weather was questionable for Saturday, but after missing my range trip earlier in the week, I was committed to attending the match, even if the weather was inclement. Fortunately the rain held off, although it did remain overcast, damp and cool throughout much of the match.

We began the first stage holding an AR-15 blue gun shoulder in a shooting position. At the start signal, we hung rifle by its sling and drew our gun, which was loaded with six rounds. There were three targets to be engaged around a barricade. Then two targets to be engaged while on the move to the next shooting position. The stage ended with three more targets around a barricade.

The next stage again made use of the prop gun, which was simply slung over our shoulder. We also carried an ammo can in our weak hand. Three targets were engaged on the move strong hand only. After moving to cover we dropped the ammo can and engaged three more targets.

Both of these stages were a lot of fun to shoot, and the added props served to keep us off our stride. 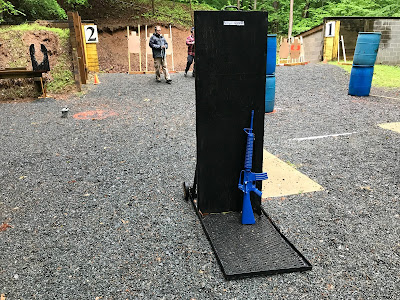 The next stage required both strong and weak hand shooting, with all shots taken while kneeling. We started with the loaded gun in our weak hand, facing two targets. Six shots were required, weak hand only, on the first target. Transitioning to the strong hand, we then put six shots on the remaining target.

The next course had eight targets to be engaged from three different shooting positions. We began the stage holding a box in both hands, and after dropping the box we shot three targets around the right side of a wall cover. Moving to the other end of a wall, there were three more targets from the left side of cover. Moving to a third point of cover, we finished off the last two targets. 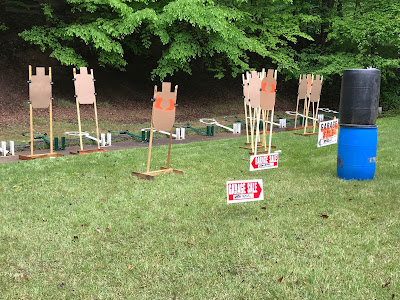 The final two stages were shot on a course of fire that was shot twice, in opposite directions each time. On one side of the course was a barricade from where three targets were engaged, while other side of the stage featured stacked barrels which also hid three targets. All targets required three hits each.

Our group was the last squad to shoot these two stages, and a result of many other shooters moving through and shooting the ground was now especially muddy and slick. The ground conditions behind the barricade was especially poor which meant extra attention was required for sure footing. In addition, dropping empty magazines meant they would definitely need a serious cleaning afterwards. Interestingly, many shooters opted to retain their mags and drop them in a pocket rather than let them fall to the ground. 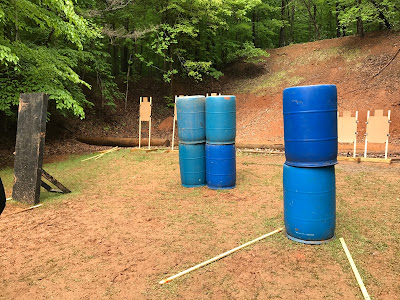 The match was very enjoyable, and the stages offered interesting challenges. I tried to pick up my speed a bit, but I did drop a few points on most of the stages. Most of those were from low shots. I really need to get in more live fire practice shooting around barricades; unfortunately given local range restrictions that will only come with shooting more matches. Despite a disappointing 13 points down, I managed to finish 3rd of 27 in SSP, and 3rd of 47 shooters overall.

As expected the drive home on the interstate took more time than the morning drive to the match. I had neglected to bring spare shoes and socks, which made the drive time with cold wet feet seem even longer. Arriving home I was looking forward to warming up. Alas, as I drove into my driveway I was reminded of the consequence of a week of rain — a yard full of extra tall grass in dire need of mowing! That hot shower and hot mug of coffee would wait just a bit longer.

More pictures from the match are posted here.