Well, actually it was a father and son trip, on Mother's Day. Our son had told me a couple weeks ago he wanted to hit the range when he came home, so how could I not oblige? He was only home four days, but fortunately the rain finally stopped and Sunday turned out to be beautiful sunny day. Colleen opted to stay home and spend some time baking, something she enjoys so everybody wins. (And we all enjoyed the fruits of her labor later in the day.) 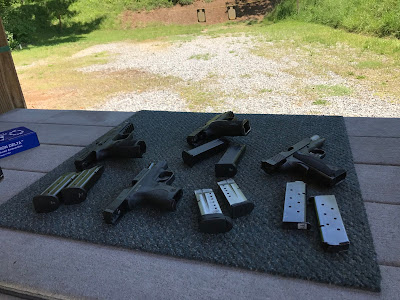 My son picked out the pistols to pack and he selected the SIG Sauer P226 and P320, the M&P Shield, and the Kimber 1911. A well-balanced selection indeed. Despite the sun shining for the first time in nearly a week, we arrived to find an empty bay to use. As we walked up to the firing line to start shooting the wind kicked up and the cardboard we had hung began blowing back into a horizontal position. On more than one occasion we had an automatic, but random, target exposure system going as we tried to catch the target when it dropped backed down vertically.

We spent almost two hours rotating through the guns. As usual, my son impressed me with his skills. It's also comforting to know he's competent with a variety of weapons. Besides all the gun talk, it was great to spend time just chatting. I was a little distracted making sure we didn't pull the trigger at the same time too frequently, but otherwise it was an extremely enjoyable outing. When he returns next month to spend the rest of his summer break with us, we'll be enjoying more family range outings.