On Saturday I ventured into Maryland to shoot the 2017 Maryland State IDPA Championship. My alarm clock sounded early Saturday morning in preparation for the two hour drive to the match. Gun in locked container - check. Ammo in a separate locked container - check. Both containers out of reach of the passenger compartment - check. Copy of Title 18, Sec. 926A of the United States code - check. There was a sporadic misting rain during the drive but the weather apps on my phone predicted no rain during match time. The weather throughout the day was cloudy with some breeze, and a few times the rain seemed very threatening, but ultimately held off. It was pretty much perfect shooting weather.

Ten very interesting stages of shooting fun were waiting for us. The bays were still wet, and even muddy in some spots from the rainfall the previous day, which is when the match staff shot. Fortunately those conditions really only affected Saturday's shooters when pasting and resetting targets, not while shooting. 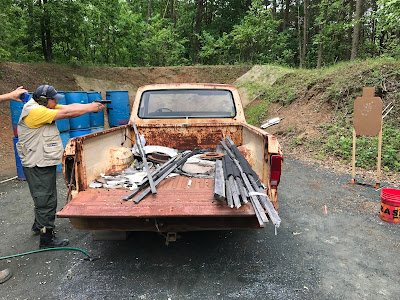 The opening stage for our squad was called "Riot" and involved shooting from behind an open car door. In a change from the initial stage description preview, there was an added requirement to shoot from a kneeling position, between the door jam and the car. Being of shorter disposition, that required me to keep my back straight to gain the height I needed. Finishing with 0 points down for the stage was a good way to start the match.

Another interesting stage was called "Relaxing at Home." We started seated on front of an electronic gun safe in which there was a pistol, loaded with just four rounds. At the start we punched in the safe's code and retrieved the gun, then engaged two targets on the move. The trigger on the gun was surprisingly "mushy" so my first shot was a long time coming. I typically don't shoot handguns with manual safeties, so I spent a lot of time before shooting reminding myself to flip the lever. After setting the pickup gun down, we grabbed our own gun and ammo off a table to finish the course. This was another -0 stage for me.

Stage 6 was a fun stage aptly named "Hose Fest." Three low targets were hidden behind barrels at three separate shooting positions. You had to run right up to the barrels and shoot over them, putting six hits into each target. The stage was done running left to right, so attention to the 180 was critical, especially when reloading. The shooter essentially ran the next position and had to turn to face the targets. The stage was interesting for me as it was the first time I had tried shooting the P320 that quickly. I found I can't, yet, pull the trigger as fast as I can with the P226 single action.

The standards stage had four paper targets and four steel poppers. The steel and two of the paper were set at 35 yards! Not having shot the new gun at distance greater than 20 yards, this was a new experience. I ended up 10 points down for the stage, which included one miss on paper. Despite that it wasn't my lowest stage finish. My shots were hitting low, so I'll spend some time overcoming that, though I don't have much of an opportunity to shoot beyond 25 yards in practice.

The two scenario stages on which I had the most shot points down, just 6 points on each, also had penalty points added to my score. In retrospect it seems that mental errors rather than shooting cost me the most. In "Day at the Office" there was a swinging target activated by the shooter using his hand to knock over a steel popper next to his seat. An interesting turning target that gave three exposures was started by shooting another steel target in the stage. My plan was to shoot the swinger last. When I finished the other targets, I aimed to shoot the swinger —and it wasn't there! I had neglected to activate it at the start. The stage description required the swinger to be activated before shooting any targets, so I had a Procedural Error penalty added to my score.

The other mental error was on the final stage I shot, "Coming Down the Hallway." The shooter passed ban electric sensor which activated a VERY fast up and over target. It also started a swinger that appeared only three times, with a slight pause between, and at each of it's appearances. To hit the quick up and over target you had to be already shooting at it when it appeared. Getting one hit on the target was cause for celebration. I spent so much time concentrating on my plan for shooting that target, I neglected to pay much attention to the swinger's action. When I got to it, the target was hidden, so I moved to another target in the array. The mover then made it's final appearance, and disappearance, before I could get back to it. This forced me to attempt a very tight shot at a piece of the technically disappearing target, hitting a non-threat. I should have simply waited on the target as that delay would have been less than the 5 second HNT penalty. 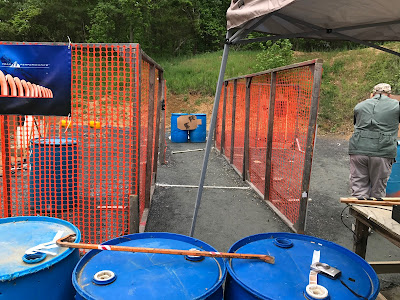 All of the stages provided fun and challenging shooting scenarios. Our match fee also included a delicious lunch from Southern Bobby-Q Catering. The meal provided a nice break mid-match for relaxing and socializing. Although the poor planning mentioned above did occur AFTER taking time to fill my belly; maybe I needed a post-lunch nap!

The match flowed very smoothly and we had minimal waiting time between stages. Shooting started promptly at 9:00 AM and we finished around 2:30 PM. The award presentations took place about an hour later.

This was my first time shooting the new SIG Sauer P320 in a match. I was nervous, but at the same time confident in my ability to shoot it. Overall I was extremely pleased with how well it went. I was happy with most of my times, and I even finished three stages -0 down. Finishing 4th of 20 in SSP Sharpshooter earned me a glass trophy; literally a mason jar drinking glass. How appropriate. My overall finish was 27th of 134.

Virginian's traveling into Maryland are subject to random stops on the highway by state enforcers targeting Virginia drivers. After being patted down on the side of the road when returning from the Chesapeake Cup simply for legally transporting firearms, I was more than a little anxious about this trip. I've attend a few events put on by the Sanner's Lake Sportsman's Club and know it's always a well-organized and fun match, so I didn't let the threat of police harassment sway me from attending this event. I had a great time shooting the MD Championship match and that, perhaps, makes future trips to shoot in Maryland a little more likely.

I've posted more pictures from the match on Flicker.