In the nine or so years I've been attending pistol matches, be it USPSA or IDPA, I've always shot in the "stock gun" divisions. Other than some experiments with sights and adding grip tape, I prefer the guns as they come from the factory. Some of that affinity may come from the fact that I became interested in shooting originally for self defense reasons, and only came to competition as a way to test my skills.

The USPSA Production and IDPA Stock Service Pistol divisions have fairly strict limits on what you are allowed to change on the gun. Sure, I've admired some sweet Limited (USPSA) or Enhanced Service Pistol (IDPA) guns that friends have, but it's still stock that holds my attention. My BUG and CCP guns are also "out of the box." I will also definitively that I've never been tempted in the slightest by the Open gun phenomenon.

Though I often shoot the same guns I carry in competition, I admit to switching holsters and concealment garments when competing. That said, I also practice with my carry holsters and "street clothing" often.

I'd rather spend money on bullets than doodads. 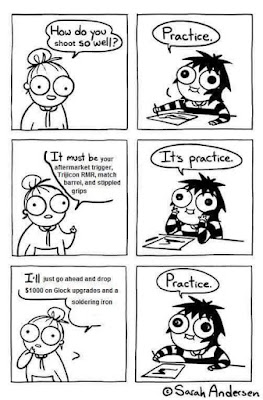