Activity on these Musings has been light of late, but that doesn't mean we haven't been busy around here. A lot has been going on, not the least of which was the celebration of our son's graduation from college. Over our four-day celebration, we made a visit to Eastern Divide Brewing in Blacksburg, VA.

We arrived at the brewery just before their noon opening time on a Saturday. In the next 10 or so minutes more and more cars arrived in the parking lot. The brewery has only been open a few weeks, but seemed to be attracting many visitors. The doors were opened a few minutes late and we streamed in. The visit started off with a laugh as the employee opening the doors locked himself, and us, outside. We all walked around to the side and entered through the large deck overlooking the surrounding fields and mountains. 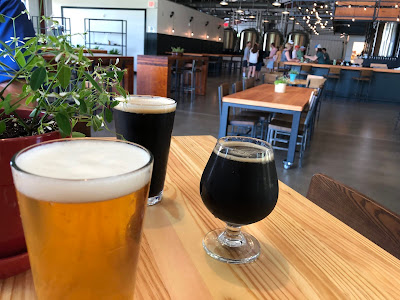 Ten beers, two sodas, and a cold-brewed coffee were on tap. After a few minutes I settled on the  Black('sburg) Pale Lager. This is their take on a Black IPA. The beer has a roasted coffee flavor with an accent of pine and citrus hops. Quite tasty.

Other members of our group ordered Up-Nod Belgian Quad and Eastern Divide Pils. Stealing a few sips from their glasses, I found those beers to also be enjoyable.

Besides trying the beers, lunch was also on our agenda. Feast & Company is the onsite food service. We ordered a variety of meat pies, frites, and chicken wings to enjoy with our beers. While the food was tasty, getting it was somewhat of a trial. The catering service has apparently been established for a few years, but their service at the brewery is not yet settled in. A number of folks were lined up to order food by about 12:30, but no Feast & Company staff was yet taking orders. There were a large number of people working in the kitchen, however no one acknowledged the waiting patrons. I heard one person ask the bartender when the food service opened, and the reply was, "In theory, at noon." Finally about 40 minutes late, someone appeared to take orders.

When our beeper went off and we went to pick up our food, I was handed a cheese plate, even though we hadn't ordered one. I gave that back to the server who then went to find our proper orders. As we started walking away with our food, we realized we were missing an item, so we went back to the window and the server then found that item. Once back at our table, it was noticed that one of the wings orders was missing the sauce, I went back to the pickup window again to retrieve that. In the end, we enjoyed the fresh and flavorful food. Hopefully, the Feast & Company folks will get their system down soon. 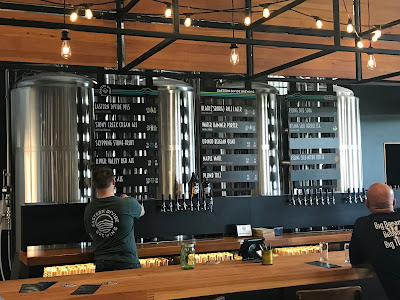 With my meal, I opted for the River Valley Red Ale. This is a well-done Amber Ale with notes of caramel and nut. Another solid beer from this new brewery.

The tasting room at Eastern Divide is large and spacious. There is plenty of room between tables, so even as more visitors arrived it didn't feel crowded. In a nice touch, two self-serve cold water stations, with actual glasses, were also available. That is a very appreciated detail.

I suspect Eastern Divide will be a popular beer attraction in the New River Valley. The beers are well done and there is plenty of room, inside and out, for folks to enjoy the beers. I am confident we will return during future visits to the area.