In addition to the exciting stages in a well-run match, the Maryland State IDPA Championship features an extensive prize table. This year, fourteen guns were given away by random drawing. During that portion of the post-match awards ceremony, I was standing in the back of the crowd enjoying a cigar with some other smokers. Admittedly, I wasn't paying close attention to the names being called. With 184 registered shooters, I wasn't expecting to hear my name.

And then I did. I made my way to the front and was awarded a certificate for a free Glock pistol, courtesy of GLOCK, Inc. That makes two Glocks won by this SIG Sauer fan in less than year. 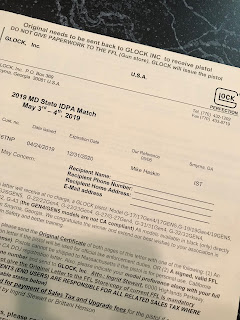 I only recently received the Glock 19 I selected with the certificate I won at the IDPA National Championship. It's not even come out of the box yet. At least I have over a year to decide what to do with this certificate.

Don't get me wrong. I would never complain about a free gun. However, the irony is not lost on me.