Never Too Hot For A Fire

Or a bourbon. Or a cigar. 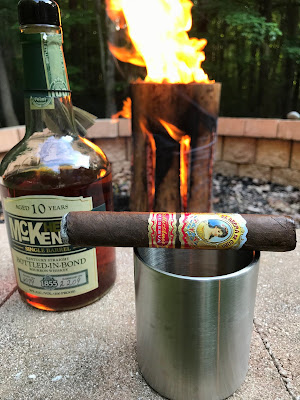 After shooting the Cavalier IDPA match in the morning, followed by moving furniture around in the afternoon, I was sitting on the deck, on the verge of nodding off. We had discussed using the fire pit in the evening, but the temperature was still well above 80º and it would have been easy to forgo the fire.

But we had an old Swedish Fire log that needed to be burned before it rotted. And there was the bottle of Henry McKenna Single Barrel which had yet to be opened. This bourbon won Best in Show Whiskey at the 2019 San Francisco World Spirits Competition. So we lit the log and opened the bourbon. Of course, that called for a cigar, in this case La Aroma de Cuba Mi Amor Reserva Maximo.

We just had to sit a ways back from the fire.