We headed over to 1781 Brewing on Saturday with the hope getting in a few beers, and a smoke, before the rain. We knew we had just a couple hours before the predicted weekend of precipitation began. I grabbed a "glass" of König Fruhling Doppelbock, and a Dunkelweizen for Colleen. Aware of the clouds rolling in, I lit up my RoMa Craft CroMagnon Aquitaine Blockhead LE. right away. 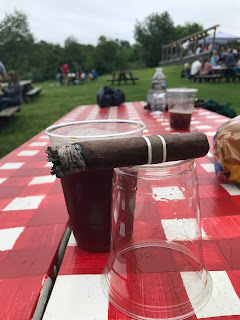 The Doppelbock had lightly toasted malt and caramel flavors, and well as a moderate 8.4% ABV. The Dunkelweizen was a lower 4.7% ABV and featured a bready yeast behind the malt. Both were quite enjoyable.

The RomaCraft cigar is one of my favorites. It's a full bodied cigar with earthy and espresso notes, touched with a hint of spice. While I started out enjoying it with the Dopplebock, I knew it would pair just as well with the Dunkelweizen. But, just to be sure, I grabbed a pint of that beer as well. (I was right.)

As we finished the beers and the smoke was down to the nub, the rain started falling. It was a short but pleasant afternoon break.