On Saturday morning over the Memorial Day weekend I headed off to the monthly Cavalier IDPA match. It had been three weeks to the day since I had last shot, or even touched the gun; not even to dry fire, or to clean it. It happens when life gets busy.

The first stage we shot, called "Cookout Prep," began by pushing a lawn mower forward, activating a swinging target behind us. After engaging the swinger, we worked our way around some walls to find more targets. I was pleased to shoot the stage just one point down, from a low shot on the swinger, but I did also earn a 3 point Procedural Error for forgetting a target at the second shooting position. Fortunately the target was visible to be shot at the last position so I didn't also get the associated misses. 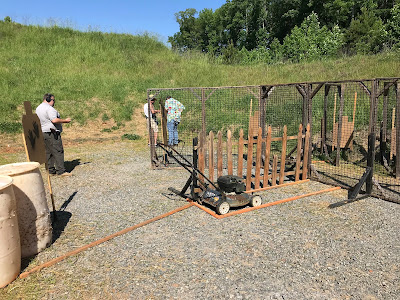 "Cleaning House" was a -1 stage for me. Starting facing a wall, we turned to engage two nearby targets, one a head-only threat. After moving to engage a falling steel popper, the rest of the stage presented both open targets, and ones partially obscured by non-threats.

Next up was "Last Stand & Deliver." We stood at a table on which we had placed our gun and magazines. Targets were set in three sections of priority; two paper, three falling steel, and a single far "tuxedo" target. Our gun was downloaded to three rounds at the start, and all paper required three hits. Unfortunately I shot a little sloppy on this one, forcing extra shots on the steel, and had two misses on the last partial target.

"Roundabout" presented a meandering path through the course of fire. There were nine targets to be engaged from seven shooting positions. At six of those shooting positions we engaged a lone target, with three targets found at the last. Our path had us winding back and forth and around walls. I saw more than one shooter miss engaging a target by skipping a shooting position. I had one miss on this stage, adding to my total of 7 points down.

We ended on "Morning Commute." This two-string stage started with us seated at a table for both. For the first string we shot targets on both sides of the table, then finished with a two target array behind a non-threat. All shots were taken through a narrow, and slightly low, port through the walls. On the second string we again started out seated, but moved to find four targets to be shot from two or three points of cover, depending on shooter preference. I nipped the wall on the second string, saw the missed shot at the end, with a round left in my gun, but my mind never reacted to "Shoot it again."  I blame the heat. :-) 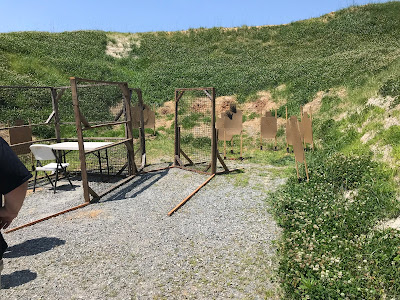 This was a fun match. The morning was very warm, but we finished all five stages in about 3½ hours. I had some disappointing stages, though I still enjoyed the shooting very much. The courses of fire were interesting and seeing friends is always fun. I may not be as competitive as I was in the past, but I am still having as much fun as I always have.