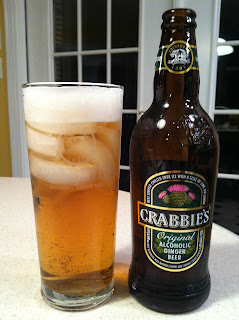 A few weeks ago a package arrived with a sample of Crabbie's Alcoholic Ginger Beer, along with a logo glass. Alcoholic Ginger Beer is a beverage that's to new me. It's not a "beer" in the traditional sense, but we're alway open to trying new brewed beverages. I had a bottle of Bundaberg non-alocholic Ginger Beer during our pilgrimage in Ireland, but given the food and drink sensory overload of the trip, I recall little about it.

According to the promotional materials, Crabbie's is served over ice, with slice of lime or lemon. Well, anyone who knows me, knows I don't do ice or fruit in my beer. However, since the marketing folks were kind enough to provide a tall glass for the sampling, I decided there was room for ice. Alas, no limes were found in the fridge.

After the sample bottle arrived, I went out and picked up a four-pack at the store so that Colleen and our friend Checkered Flag, who is an avowed cider fan, could participate in the review as well. We shared our reviews via text message as our friend was unable to be with us in person. The text messages flew fast as everyone shared their impressions.

In my head, I had imagined the beverage to be similar to a cider. But the rapidly developing white head changed that impression, and slowed my pour. The aroma is rich in ginger, along with some honey and floral notes. The flavor is refreshing and rich, not the artificial sweetness often found in ginger "sodas." The flavor matches the aroma in ginger richness, it's exactly what one would expect. And the flavor of the ginger lingers, along with a stickiness and mild tartness in the finish.

We were all in agreement that this is an enjoyable beverage. Everyone's thoughts immediately turned to enjoying the Crabbie's on a hot summer day. At just 4.8% ABV it's certainly suitable for a summer refreshment. The beer has a unique flavor, one that will probably appeal to fans of both craft beer and hard cider. Colleen, who prefers her beer before or after, rather than during, a meal decided she could indeed enjoy this with her food. As it happens, our friend was enjoying his drink with a cheeseburger topped with that U.K. classic, HP Sauce, and said the beer held up nicely.

There are still a couple bottles left in the refrigerator that we'll be enjoying soon. I read that Crabbies' can also be used in cocktails such as a Moscow Mule, made with vodka, ginger beer and lime. I've never been intrigued by beer cocktails, but since I'm trying new things, maybe the time is right for that experience too.

Crabbie's Ginger Beer, a product of the United Kingdom, made its appearance in the U.S. last year, imported by St. Killiam Importing. It's currently available in 23 states. In Virginia, Crabbie's can be found at all Total Wine, Wegman's, WorldMarket, and Farm Fresh stores.

One bottle of Crabbie's Ginger Beer, along with the Crabbie's glass, was an unsolicited gift from the promoter. The beer was reviewed of our own free will.