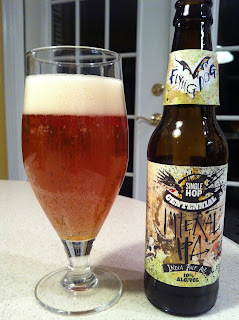 After fueling up on coffee in preparation for a Lenten lecture at church Saturday evening, only to find out the announcement in the bulletin was in error, I came home looking for a beer with which to counteract the evening caffeine. I pulled out a bottle of Flying Dog Single Hop Imperial IPA with Centennial that I had received from the brewery a couple months ago. (No, I don't know how I missed it for so long.)

I poured the beer into a cervoise-style glass, just because glassware can add to the fun. (Despite the rants of some curmudgeons.) The beer has a deep marmalade color and the thick head drops to leave behind lots of hop-induced sticky lacing. The aroma is enticing with honey and sweet fruit notes. This is a strong, citrus flavored beer. The taste isn't the bitter citrus rind of which I am so found, but more like the juicy meat of the citrus fruit; lots of grapefruit and orange here.

The mouthfeel of the beer is slightly syrupy, and the descriptive "soft" popped into my mind as I swirled the beer in my mouth. I noted a strong alcohol presence when I reviewed the 2011 version of this beer, but the 10% ABV seems more muted in this 2012 version.

Like the long names on the labels, the Flying Dog single hop series beers are a mouthful. Not for every palate, but for this fan of the Double/Imperial IPA, they're fun and tasty beers.

Disclaimer: This bottle of Flying Dog beer was an unsolicited gift from the brewery. This review was written of my own free will.