One of the often repeated accusations of the gun control movement is that law-abiding citizens have nothing to fear from the government. Tell that to the estimated 120,000 Japanese Americans, the 11,000 people of German ancestry, and the 3,000 people of Italian ancestry, who among others were removed from their homes and locked up in government camps without charges or trials during World War II. 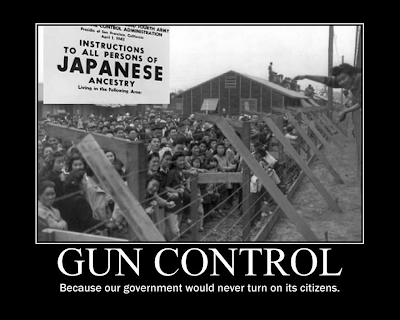 Executive Order 9066 was enacted on February 19, 1942 by President Franklin D. Roosevelt. It was finally rescinded by President Ford in 1977. It's an eery similarity that we now have another democratic party president who is claiming for himself the right to imprison or kill Americans, again without the benefit of charges or trial. Among those the president deems a danger today are supporters of the U.S. Constitution.

Those that fail to learn from history, are doomed to repeat it...