Saturday I headed out the door early, heading to Summit Point, West VA for the monthly Walnut Ridge USPSA match. I was looking forward to the day, not only for the interesting stages I knew awaited, but because a large number of a local shooting friends were all attending as well. It was going to be a fun day of visiting with friends, and meeting new ones, and of course shooting. It meant an early start to the day, but that's what weekends are for!

The match consisted of five field courses and one classifier stage.  The stages at Walnut Creek are generally compact, but packed full of interesting twists and turns. Literally. Most stages make use of the full 180° allowed. Often they require changes in direction of movement, wide swings, and tight shots. A single target visible at only a small point, might force the shooter to come to a complete stop when moving between two other target groups. We also saw larger groups of targets all shootable through a single opening, but not without a lot of bobbing back and forth to see them all. All this made for lots of discussion, decisions, and planning. And then remembering the plan once the buzzer sounded.

A few of us often joked that the course designers had something against Production shooters, with our 10-round limit. Now I know how the revolver shooters must feel at times. The challenge sometimes became finding the best point at which to do a standing reload. Or being alert that you will go to slide lock at a certain point. I realized just how much I was unaccustomed to slide lock reloads. I knew that I would be at slide lock as I moved to the last target array on one stage. Yet, when I changed the magazine and went to shoot the final target I realized the slide was still locked back; I had inserted the new mag but not released the slide. Dropping the slide while reloading on the move just wasn't "normal," since I would typically be reloading a gun that was not empty.

Another stage had lots of steel targets as well as paper. For the Production shooter, not going one-for-one on the steel poppers meant doing a standing reload. One popper I hit too low and it didn't fall, which meant time lost to reloading. I may have missed the first makeup shot right after reload. During the classifier stage I also dropped the first shot after a required standing reload as well. Patience reacquiring grip and sight picture after a reload might be something to work on during future practice sessions. [Note to self.]

I was pretty happy with how I shot the five field courses. I had no misses or no-shoots, although I had some D hits which might as well be misses. The classifier stage, was a different story for me, and others, and was a point of good natured ribbing for our squad. "Nuevo El Presidente" is essentially a "go fast or go home" stage. Unfortunately a large number of us fell to the no-shoots. But it was all still good fun.

Although I am still partial to my "home match," Walnut Ridge is becoming my other favorite place to shoot. I enjoy the variety of shooting challenges presented, as well as the stage analysis and planning challenges. I also am very appreciative of the Saturday schedule, which seems to be a rarity among USPSA clubs. I can devote Saturday to shooting, and still attend my regular Mass on Sunday and have a day with family before starting the work week. The two hour drive to the range, and then back, is but a minor inconvenience. The drive is pleasant, and mostly not on Interstate. Coffee gets me there in the morning, and the 80's satellite radio station, playing at maximum volume, makes the drive home fun and fast. 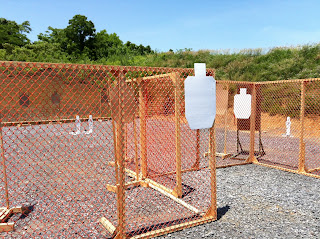 I'm looking forward to next month. I've got the July match on my calendar, and most importantly, an alarm set for the opening of the online registration.