Despite the GPS in my car seemingly working against us, we found the Ashburn, VA industrial park where Lost Rhino Brewing calls home. As we pulled around the corner, I could see a steady stream of folks going in and out, most all carrying growlers. Lost Rhino was doing a brisk growler-filling business. Once inside I learned that Sunday means discounted growler fills — something I would take advantage of before our visit was over.

The giant chalk board listed a large selection of beers to choose from. To make it easy to try a variety of beers, the brewpub offers three different serving sizes of most brews. I was looking forward to trying the "historic" Lost Rhino New River Pale Ale, so I opted skip the smaller tasters for a full 16 ounce serving. The beer pours a bright orange color and has mild citrus aroma with a sweet malt background. The flavor is a refreshing blend of the citrusy hops, as well as piney sweet notes. Nothing overly complex, but refreshing and flavorful. 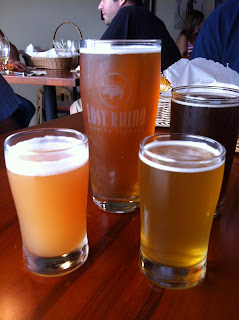 Colleen opted to try small glasses of Pretty in Pink Saison and Holy Brew Honey Blonde Belgian-style ale. The Saison was very well-done and much enjoyed by Colleen. I think only our time constraints prevented her from ordering another. The yeasty notes of the Saison were nicely complimented by the tartness of the added pomegranate. Another beer tried during our visit was the Lost Rhino Altbier, which was Checkered Flag's selection. I stole a couple sips of this one and would have liked to order one myself if we weren't on a tight schedule. The flavor was that of sweet, toasted malts with just a hint of citrus with a creamy body.

Lost Rhino has a limited, but interesting, food menu to go along with the wide range of beer available. For our food selection consisted of a Bavarian Pretzel basket, served with some very spicy mustard; a Charcuterie platter with a local sausage assortment; and BBQ chicken nachos made with Woody Stout BBQ sauce and Face Plant IPA cheese topping. We nibbled in delight as we enjoyed our beers. 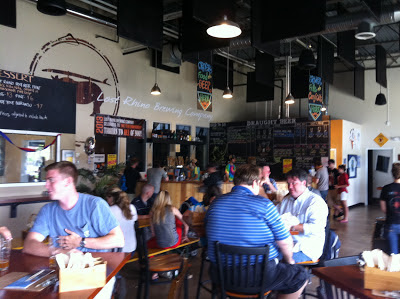 I couldn't resist picking up a six-pack of Face Plant IPA, in cans, to take home. Seriously, could there there a better name for an IPA? Look for more on that beer in a future post. I also grabbed a growler of New River Pale Ale for my friend Greg. I knew the original New River beer was the beer that inspired him to get into home brewing. Of course, I had to deliver that to him right away, lest I'd be tempted to keep it for myself! 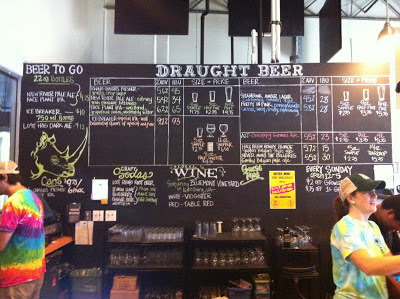