Dinner and a Beer. Or Two.

After a fun USPSA match, Colleen and I headed out for a relaxing dinner and a few beers at Capital Ale House. Our decision and timing proved excellent, as not only did I capture the prime parking spot right out front, but the sidewalk billboard announced that our favorite CAH meal, the Schnitzel Sandwich on a Pretzel roll, was a featured entrée.

Meal choice already made, we were left to peruse the beer menu. The Capital Ale House menu is arranged, generally, by beer style. When I'm hoping to try something new, I prefer a brewery-based listing myself, but we muddled through and found a couple of beers that were both new to us. Colleen opted for Lost Rhino Final Glide Hefeweizen, and I selected Rye of the Tiger from Great Lakes Brewing. We also selected a plate of Deviled Eggs topped with crab meat as an appetizer. 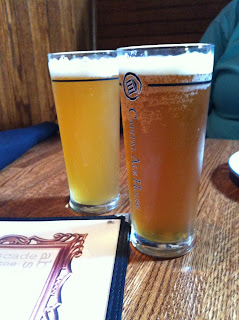 The Deviled Eggs were delicious. The crab meat topping added an additional flavor treat. I stole a few sips of Colleen's Hefeweizen and it was very tasty. I believe it is a new release from the Ashland brewery. Colleen even texted a picture of her beer to our friend Checkered Flag, who's a big fan of the style. We had recently visited Lost Rhino with him, but this particular beer wasn't available at that time.

Rye of the Tiger is a moderately hoppy IPA. The aroma is semi-sweet with both citrus and floral hop notes. The bitter and citrus hops in the flavor are moderated by the sweet, caramel malt base. I was also struck right away by the creamy mouthfeel of the beer. I found it to be a tasty IPA, that did not overwhelm with any strong one-sided flavors.

When our Schnitzel Sandwich platters arrived, the sides of frites were accompanied by spiced mayonnaises; Colleen's plate had spicy, peppery blend, while my meal came with a dill version. Colleen preferred the more moderate condiment so we swapped, although sharing was still allowed. However, my now extra spicy meal called for another beer, and one that would hold up to that red pepper flavor. For this purposed I selected the Devils Backbone 8 Point IPA. Even though both my beers were technically American IPAs, the beers could not have been any more different. 8 Point IPA is brewed in the "west coast" style, with an intense citrus hops in both the aroma and taste. This robust flavor profile was surely exaggerated by my having just enjoyed a more moderately flavored IPA.

It was an pleasant and relaxing evening spent enjoying good food, beer and conversation. But soon the recent late nights, the early start to the day, not to mention driving and shooting, would catch up to bring an early retirement to our Saturday. But what an enjoyable day it was.