While spending the weekend in NoVA, we headed out for an early lunch as Mad Fox Brewing in Falls Church. We arrived about 11:30 for an early lunch and got right to work on enjoying some of the house beers. (After all, it's noon somewhere.) I had received the Mad Fox email newsletter the day before so my choices planned already. My first selection was Oaked Leonidas Batch 300. The beer was a tribute to the brewery's 300th beer. Dry-hopped with Citra and Simcoe hops, this very dark beer was more Double IPA in taste than appearance. A nice piney aroma was followed by a citrus and malt flavor. The oak aging contributed some earthiness, but added minimal additional flavors. It was a tasty accompaniment to my menu perusal.

Colleen ordered a snifter of a lovely Saison. The beer had a spicy, bready aroma. The flavor with tart fruit, honey and cloves. A dry Belgian yeast finish rounded off the flavor. Our friend Checkered Flag ordered his usual, the Kölsch. Sharp, crisp hop and malt flavors, with a mildly bitter finish. After stealing a sip, I always consider a glass for myself, but there's always some other beer to try. 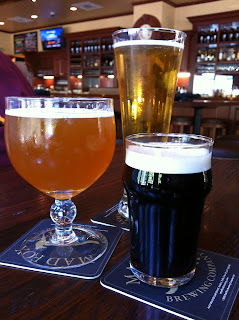 We all opted for house pizzas for our meals. Both the "Garlic Pig," with pepperoni, bacon, shaved garlic, and mozzarella, and five-meat "The Mob," made for flavorful meals.

It was now time for one of that "other beer." The email promotion mentioned an offering that was a barrel aged blend of Mad Fox's Wee Heavy and Crazy Ivan Russian Imperial Stout. That sounded just too good to pass up. When our server brought my drink he warned, "Be careful with that. It started out at 11.8%, and we don't know how much more was absorbed from the barrel." He then added, "You'll have a non-productive afternoon!" This was one of those beers that makes you say "Woo-hoo!" The aroma is deep, dark malt with some toffee and roasted coffee. And the aroma of the bourbon barrel was unmistakeable. The flavor followed suit with a very rich bourbon and oak flavors. The dark malts and roasted flavors came through as well.

While it didn't lead to a totally "non-productive" afternoon, we did linger at Mad Fox for a bit longer than we had originally planned — not that that's a bad thing! It was a very enjoyable lunch with some really tasty beers. But eventually all fun things must end, so we ventured out into the Saturday traffic to head to our next stop, a visit of the soon-to-be opened BadWolf Brewing Company. And that's a story for another post.