Stone Brewing ///Fear.Movie.Lions Double IPA is a newly release beer brewed at Stone's new Richmond, VA facility. Officially debuting on June 4, I was treated to a couple of advanced samples for review. Unfortunately, life got in the way of me getting out an early review. While the pre-release samples were brewed in California, ///Fear.Movie.Lions will be brewed exclusively in Richmond, and distributed only in the eastern U.S.

The beer's unusual name comes from what3words. what3words is a unique global addressing system that attempts to settle directions in previously difficult to locate locations around the world. The system divides the earth into 3 meter by 3 meter squares, each designated by a unique three word address. I diverted from drinking the beer to reading about what3words; it's an interesting concept and something I'll watch to see how it catches on. (I also spent time exploring the 3 meter addresses in my home with the iPhone app.) The name ///Fear.Movie.Lions denotes the address of the 3 meter square in the Richmond brewery where this beer was created. 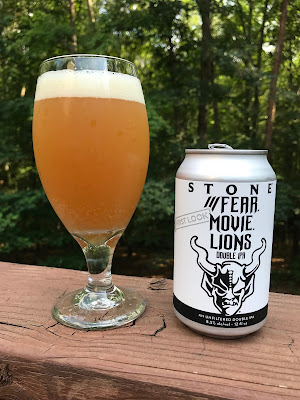 Stone ///Fear.Movie.Lions takes the concept of the unfiltered New England IPA and ramps it up into the Double IPA realm. The beer pours very hazy and thick looking. It's a dark marmalade color topped by a rich beige head. The aroma brings notes of grass, spices, and tropical fruit, and a hint of dankness. The flavor profile is rich with a range of fresh "juicy" citrus fruit, notably orange, marmalade and grapefruit. Moderate citrus rind bitterness is balanced by a hint of sweet malt. Mouthfeel is thick and the lingering citrus notes extend the flavor experience. The ABV of 8.5% is well masked, but warrants care in sipping.

If you're a fan of the New England IPA style, or Double IPAs, or citrusy beers in general, Stone ///Fear.Movie.Lions is sure to satisfy. That is, as long as you're on the East Coast.

The beer reviewed was an unsolicited sample from the brewery. All drinking and commenting is done of my own free will.