Too many conflicting commitments and other activities have prevented me from getting to the monthly IDPA matches at Rivanna since last February. This weekend, I was finally able to get there, and despite much time spent on the road lately, I was looking forward to rising early and hitting the match.

Attendance was a bit lighter than usual, just 31 shooters, but that also meant a quick morning of shooting with little down time. We shot the four stages in just over 2 hours.

The first stage had us starting in the middle of a wall, the shooters choice of which direction to go at the buzzer. Groups of two or three targets, along with some non-threats, were found at four shooting positions. Despite the stage walls and cover positions being symmetrical to either side, the target positioning was not. That made stage plan awareness all the more critical. I was relieved to shoot the first "get over the nerves" stage clean with no points down.

The second stage was an "L" shaped course. The initial targets were engaged while advancing down the long leg, shooting towards to side berm. Making the turn we found are targets around the ends of the short wall. It was a (seemingly) easy stage that lured me into shooting too fast, and racking up three points down and a hit on a non-threat. 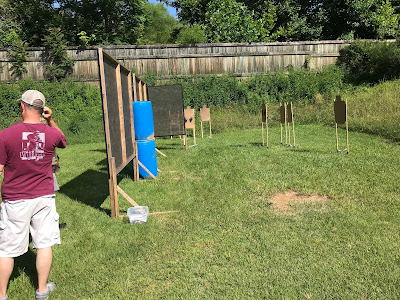 For the next stage, match director Tony had rolled out the red Mazda pickup often seen at Rivanna. I am not totally sure why, but I always seem to enjoy the stages when we shoot from, and around, this prop.

The stage began with the shooter in the driver's seat and the loaded gun on the passenger seat, truck door closed. There were two targets to be engaged through the passenger window opening, and one via the driver's side. Exiting the vehicle three more targets were available. It was a fun stage which I shot just one point down. Alas, I was informed that while shooting the last three targets I had one foot remaining in the vehicle; the stage brief noted that both feet had to be out of the truck and on the ground. That cost me a three second PE. 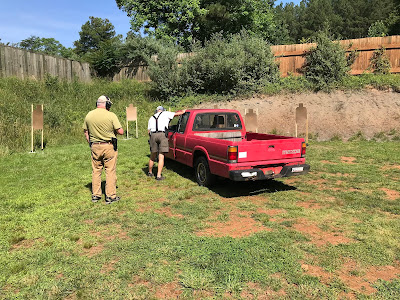 The fourth and final stage is the one that had folks talking. Three groups of targets were placed downrange of three shooting boxes. Each target array was comprised of three threat targets behind two non-threats. Each of the targets had limited scoring zones available, and to my eyes, as you moved left to right, the center target had an increasingly smaller area exposed. Careful aiming was called for. There were numerous repair pasters already on many of the non-threats from previous shooters. I thought to myself, "This is the last stage of the day, so finish strong." 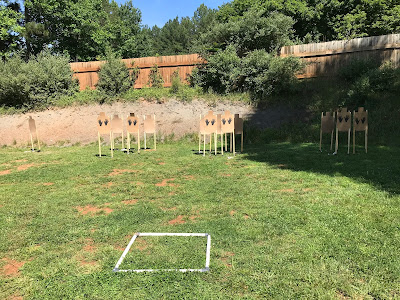 I wasn't overly concerned about the time, I just wanted to shoot it without hitting any non-threats. This was my chance to make up for the PE on the previous stage, and the careless HNT on stage 2. I took my time and concentrated hard of sight picture and trigger press, and ended up just three points down and no hits on the non-threats.

When I finished I told a friend I felt like that was my best stage of the match. I joked that the setup forced me to actually pay attention to the sights and to take my time. And that all paid off. I ended up with the second best score overall on that stage, second only to the overall match winner. Interestingly, despite feeling like I shot slow, even my raw time was the fourth fastest. It was a great way to end the match, and I think there are some valuable lessons there for me as well.

We finished shooting before the afternoon heat became unpleasant, which added to the enjoyment of the morning. The stages offered an interesting variety of shooting challenges. My score put me 5th of 31 shooters overall, and 1st of 10 in the SSP division.

The drive home found me stuck behind farm vehicles on a long "no passing" road several times. On the bright side that the extra drive time gave me time to enjoy, several times over, the new Buddy Guy album I had downloaded the day before. All and all this was a most excellent start to the weekend. There was more fun to be had later in the day.