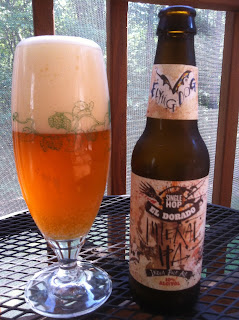 Here's another beer in the "Single Hop" series from Flying Dog Brewery. I received this sample of Single Hop Imperial IPA with El Dorado from the brewery a few weeks ago but promptly forgot about it. I saw it recently when digging throughout the beer fridge and broke it out. If the folks at Flying Dog went through the trouble of shipping the sample to me, I should do them the courtesy of drinking it. (I know, it's a sacrifice, but really, hold your sympathy.)

I made my usual "hard pour" into a hop-embossed cervoise glass and wound up with a thick head of foam. The head dropped fairly rapidly leaving a thin, but persistent layer. The aroma is fruity with a hint of citrus. The flavor is bitter citrus, one might say even harsh. Whether that's a good thing or not depends on your taste preferences. Being a fan of bold flavors, I found it enjoyable, but admittedly, I would not spend the evening consuming multiple pints. (And the beer checks in at 10% ABV too.) There's a moderate sweetness that comes through at the end, which lingers stickily on the palate.

Flying Dog Single Hop Imperial IPA with El Dorado hops is definitely a hop-head's beer. I enjoyed my glass on the first day of Summer with the temperature around 97°. A bold beer for a bold day!