The "Have A Plan" Edition

On Saturday I shot the June USPSA match sponsored by Fredericksburg Practical Shooters. The match consisted of 7 stages. Six stages made use of the setup left from the VA/MD Sectional held a couple weeks ago, plus one Classifier stage. Regular readers may recall my previous laments about my planning for a stage going awry. I've been working on committing my plan of attack to memory before each stage, and then sticking to it. And honestly, I've been pretty happy with the results of that exercise.

The second stage I shot at this match, which was the Classifier, was quite uncomplicated. Draw, engage the four targets with one shot each, perform a mandatory reload, then one more shot on each target. The second string was the same, except after the reload the four targets were to be engaged strong hand only. The third string required four shots weak hand only. On the second string, after the reload, I engaged the four targets freestyle, not SHO. Four shots, four procedurals, 40 point penalty. I forced myself to laugh at my lapse. Afterwards I realized that I have no memory of making a "plan" for that stage. During the reading of the stage directions I thought "Okay, that's pretty straightforward." But I never walked through it in my head, like I try to do on every other stage. Good lesson; it really does help!

On another stage I had to take a few extra shots on steel and needed an extra reload. But I still made the planned reload at the spot I intended, which kept the of the stage on plan, even though I had taken only two shots from the "extra" mag. Stick to the plan.

One of the more interesting stages involved a wide "door" that pivoted in the middle. There were paper and steel targets behind each side divided by a wall. Pushing the door in on one side caused the other side to swing out. The fault line was at the plane of the door. After shooting on one side, the shooter had to move to the other side. This involved either holding the swinging panel open and backing around it and into the doorway, or pushing the outward facing side in. The swinging panel was spring loaded so it would not stay open without being held. My attack plan for this stage was to hit the targets behind the two ports on either side of the door and then move to the center, pushing the door open on the left side with my right foot and engage the targets. Then reload and push the other side open with my left foot. Holding the door with your foot leads to a slight imbalance when shooting. And that was likely the intent of the course designer!

We started shooting about 9:00AM and finished up a little after 3:00PM, which included tearing down the stages. It was a very enjoyable match. The weather cooperated with a slight breeze most of the day, so even the shadeless stages were not too uncomfortable. I ended up shooting on a squad with a bunch of folks I'd never shot with before, and that was a lot of fun too. Odds are pretty good at any shooting sports event you'll meet friendly folks and this day was no exception. As of this writing, the scores have not been posted, so I can honestly say I'm okay with how I shot (with the one exception noted above.) 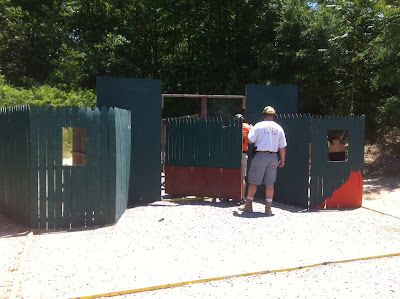 After the match I still needed to get to Sunday Mass. I had just enough time for a quick shower but little time for "recovery." My apologies Father, I may have dozed off for just a second or three during your homily. Really, it wasn't you, it was me. :-)