A Tale Of Two Pale Ales

It's hard to believe that a year has passed since I last participated in The Session. When I saw the topic that The Beer Babe had chosen, I knew I had to participate. For Session #64: Pale in Comparison, she writes:


"What is the one beer style usually makes up the first position in the sample flight, but yet is usually the one that we never get really excited about? The Pale Ale."

I actually do get excited about Pale Ales. As with the ubiquitous pub burger, when I hit a new brewpub, their Pale Ale is a must for me. I prefer the "American" Pale Ale with its emphasis on the citrus, over the English, more "malty" version, but I do enjoy both.

For this post I decided to revisit the house Pale Ales at Fredericksburg's two brewpubs.

This is my regular choice whenever I visit Lee's Retreat at the Blue & Gray Brewing Company. Falmouth Pale Ale is a classic American Pale Ale. My impression is that this beer is second in popularity only to the brewery's Fred Red. This Pale Ale pours a bright amber orange with an off-white head. The aroma brings mild citrus notes with a hint of caramel. The flavor is well-balanced between the citrus hops that hit first and the malty backbone. There's some lingering bitterness in the finish as expected. This is a crisp and refreshing beer to go with any of the pub's food.

Of the two locally brewed Pale Ales, Falmouth Pale Ale gets my pick as my favorite. This Blue & Gray beer is also available bottled in local stores. However, I suggest enjoying it at the brewpub, or picking up a growler to go, for the freshest flavor. 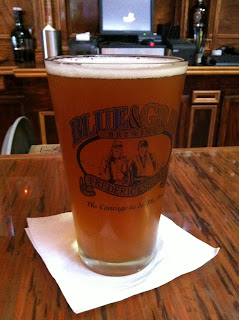 Now I've gone and gotten myself all thirsty again.