But someone has to do it.

Last week my friend Greg dropped off some variations of his award-winning Pike Ale. He was seeking opinions on the three different versions in a blind taste test. So Wednesday evening Colleen and I sat down and "worked' our way through the beers. 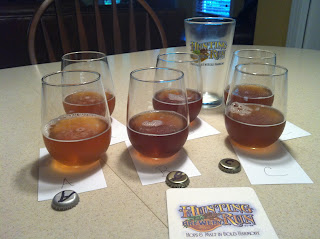 Wow, it was a hard decision to pick a favorite. All three are quite good, and any of them I would have enjoyed without complaint. We based our "judging" on taste alone — how much we enjoyed drinking the beer. The beers were extremely similar in flavor, with just subtle variations. After our initial opinions were recorded, we walked away, snacked on some almonds and drank some water. Coming back to the warmed beers, we finished them off, and came up with the same ranking order. Despite having different "favorite" beer styles, Colleen and I both agreed on the same sample as our favorite.

A tough job, but one that I was willing to take on. After all, what are friends for?