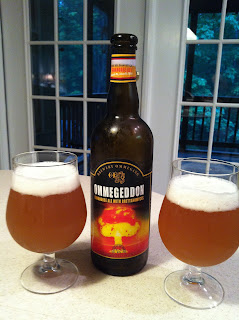 After an exciting and exhausting day of shooting, it was time to sit back and enjoy a good beer. (So there you nosey hoplophobes.) I broke out an old bottle of Ommegang Ommegeddon Funkhouse Ale. This explosive-themed beer seemed to be just the thing for the occasion. The bottle was labeled Batch #2, March 2008, and was a gift from a friend some years back.

Ommegeddon is described as a Belgian-style ale with the addition of Brettanomyces yeast, along with dry hopping. The beer pours a bright amber color with a foamy white head. The aroma brings notes of sour apple, citrus, pepper, and bready malts, all with a musty undertone. The initial flavor is citrus and some funky yeast. There's an interesting juxtaposition of sweetness and mild sourness in the taste. The complex flavor profile includes hints of pepper, fruit, and toasted malt. There's copious tingling carbonation present and the beer finishes dry and slightly astringent. The 8% ABV is not readily apparent.

I didn't know what to expect from this beer. That hesitation might have contributed to it being left for so long in storage. However, we enjoyed this very much and found it to offer an interesting combination of flavors. We accompanied our drink with a bowl of fresh strawberries and bananas, and believe it or not, a chocolate bar. It all made for an enjoyable finish to the day. The Ommegang Brewery website lists Ommegeddon on their "historical ales" page, so I'm guessing that the beer is no longer being produced. But I'll keep an eye out for sure.