Saturday morning I got an early start to the day and drove over to West Virginia for the Walnut Ridge Practical Shooters match. The monthly event is held at the Summit Point Motorsports Park near Charles Town. The half-day match consisted of six stages, five field courses and one classifier stage, set up at the ends of three, one hundred yard ranges at the facility.

If there was a common theme to the field courses, it was options. The targets were set up among strategically placed walls and free-fire zones. I think I saw as many approaches to tackling the stages as there were shooters. Just about every stage required careful planning to find the best way to shoot, taking into account the shooters' own strengths and any division ammo capacity limitations. Many times I thought I had my plan worked out, only to think "Oh, but if I did it this way..." I enjoyed the planning challenge of the stages as much as I enjoyed shooting them.

Another common aspect of several stages at this match was that you couldn't simply proceed through the stage in one direction. In a number of spots, the stage designers forced you to go into a corner or corridor, and then you had to back out or change directions towards your next shooting position. There were also many target arrays where the targets where stacked vertically, something I haven't encountered often. The courses were generally contained to small areas, despite the number of targets, and were shot quickly with only short distances of movement. 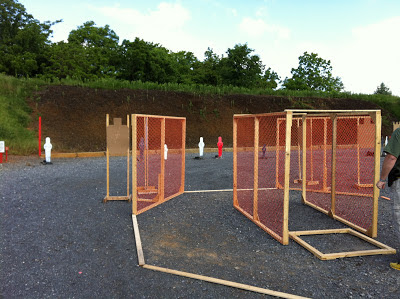 The weather cooperated making for a pleasant, if cool, morning of shooting. The wind was kicking up at times, enough to blow over the steel poppers occasionally, which created a bit of chill. But the sun was shining to help counteract the strong breeze. The motor sports park was hosting a drifting event that day; the squealing of tires adding an exciting background to the sound of gunfire.

It's a two-hour drive from my home to Summit Point. A good part of drive is on country and secondary roads, which is not unpleasant. The enjoyable match and fun people made the drive worthwhile. I was happy with my shooting too, and that always adds to the fun! Coincidently, Saturday was our family's turn to help at our son's school bingo night. That meant I had barely enough time to arrive home from the match, take a fast shower, and head over to do my volunteer duties. It certainly made for a long and tiring day. But it's a three-day weekend, so there's plenty of time to recover play. 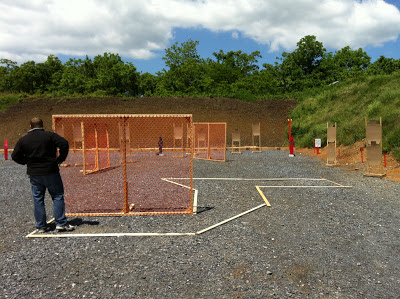