I've been looking forward to trying out this new summer seasonal from Starr Hill. Since Park Lane Tavern was featuring the beer in their "Steal the Glass" promotion this week, I decided that would be the perfect place to try the beer, and I'd pick up a new Starr Hill glass on top on it.

Grateful Pale Ale pours a clear pale golden color with a thin head. The aroma is full of citrus and grassy hops with a hint of an earthy background. The flavor is also a mix of tangy citrus and piney hops. There's a mild caramel malt base, with a bit of a toasted aspect providing a mild, bitter finish. The overall flavor is fresh and clean. The beer checks in at just 4.7% ABV, adding to the ease of enjoyment.

This new beer from Starr Hill was introduced as part of the brewery's summer variety pack, which also includes Northern Lights India Pale Ale, Starr Pils Lager and The Love. According to the Starr Hill web site, Grateful Pale Ale will also be available in six-packs starting in May. This is a seasonal offering which will be available only through July.

I don't bother writing about a beer unless I enjoy it, but Starr Hill Grateful Pale Ale goes beyond that qualification. I really like this beer! It's got plenty of hop goodness, but is not overwhelming. The beer is light bodied, low in ABV, and quite refreshing. It's got all the makings of a great summer refresher. I suspect this will be a "go to" beer this summer. 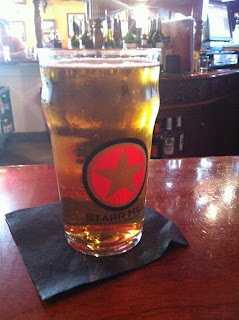