I began my recent weekend in Roanoke, VA, with a stop at the Roanoke Railhouse Brewery. The brewery opens their tap room on Friday and Saturday afternoons, so I planned my travel to arrive in town early enough on Friday to enjoy a pint or two of the brewery's beers. As my GPS announced "You have arrived at your destination," I looked around and saw no brewery. Around the block I went, catching sight of the brewery sign as I passed by a second time. The brewery occupies space in an auto tire and service garage. I found street parking nearby and made my way to the marked entrance. 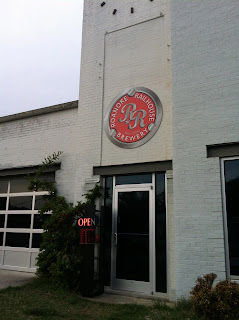 Even as I walked in the door, I had my doubts if I was in the right place. It appeared I was a car repair shop. I backed out the door to double check that I had read the sign correctly. Yea, this should be the place. I heard the sounds of people talking, so I followed the path marked out by ropes and cardboard boxes, winding my way through a corridor towards the back. 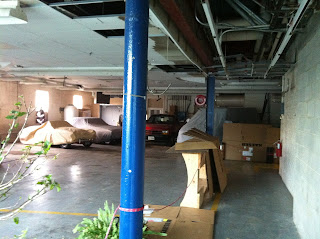 Finally I arrived in the brewery area, and found a large crowd surrounding the small serving area. It took me about 10 minutes to work my way to the front of the crowd and order a beer. I learned that the brewery serves $2 drafts for one hour on Friday, which explained the crowd. After "happy hour" the crowd was smaller, although there was a continuous stream of folks coming through. The visitors appeared equally divided between first timers, and the regular fans of the brewery.

Four beers were available the day of my visit; Track 1 Amber Lager, Switch Monkey Belgian Ale, Castle's Irish Red, and a seasonal Red Belgian. The Castle's Irish Red appeared to be the most popular, so I opted to start with that. This beer is one the brewery brewed under contract for a local establishment. I was told that business closed after the last batch of beer had been brewed, and that there were no plans to brew the beer again. The Irish Ale was a reddish bronze color with a faint malt aroma. The flavor was malty with a roasted, nutty bitterness in the finish.

I next opted to try the "seasonal Red Belgian." This beer was described as a "happy accident." It seems the brewer was working on a batch of Switch Monkey and mistakenly used caramel malt, creating a darker version of Belgian Ale. Many folks were enjoying it so I figured I'd give it a shot. The beer was a light brown color with what seemed to me, to be a funky, off-putting aroma. There was mild maltiness to the beer, but not much else to arouse my taste buds. Taste is subjective, and although I opted to leave the beer unfinished, I saw many folks ordering refills of pints and growlers. I was running out of time, and ordered another pint of the enjoyable Irish Red.

I typically don't order sample trays when visiting a new brewery. I don't find that the small samples and multiple flavors provide a good opportunity to enjoy to beers. In retrospect, that's a rule I will ignore when I next visit Roanoke Railhouse. A tasting flight here consists of four, 9 ounce samples; 36 ounces of beer for just $6.00. That's a lot of bang for the buck! 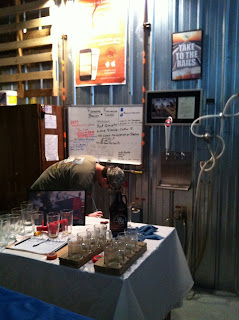 I had been most interested trying the brewery's Railhouse IPA, but it was not available at the time of my visit. However, the hotel where I was staying had quite an impressive craft beer menu, which included the IPA. I ordered a glass with my dinner later that evening. Railhouse IPA pours a dark amber color with minimal head and carbonation. The aroma is earthy with some pine and citrus notes. The flavor is fairly reserved, with a base of bready malts and some pine and grassy hop notes. I noted a hint of butterscotch and a toasted background. The overall flavor was balanced, and gave little hint of the reported 7% ABV.

I enjoyed my visit to Roanoke Railhouse Brewery and was struck by the number of fans visiting this small, hidden shop. I look forward to trying a few more of their selections in the future. I may not have to wait for a return trip to Roanoke either; the brewery will be expanding its distribution state-wide soon.