The latest groupthink from the left claims that responsibility for educating children belongs to "the community," not parents. In a "Lean Forward" propaganda piece, MSN resident Marxist Melissa Harris-Perry makes the claim, "We haven't had a very collective notion of these are our children, so part of it is we have to break through our private idea that kids belong to their parents." This collectivist proclamation should be a wake up call for every responsible citizen, parent or not.

The idea that we should allow the "collective" to educate our children is dehumanizing and wholly evil. The Compendium of the Social Doctrine of the Church states:


The right and duty of parents to educate their children is “essential, since it is connected with the transmission of human life; it is original and primary with regard to the educational role of others, on account of the uniqueness of the loving relationship between parents and children; and it is irreplaceable and inalienable, and therefore incapable of being entirely delegated to others or usurped by others”. Parents have the duty and right to impart a religious education and moral formation to their children, a right the State cannot annul but which it must respect and promote. This is a primary right that the family may not neglect or delegate.

After the initial outcry, some tried to make the claim that the Harris-Perry's comments were taken out of context. In fact, when the story first came out, I was almost ready to give it a pass. However, by her own admission, we learned that her statements were indeed interpreted correctly. She stood her ground recently with these remarks:

This isn’t about me wanting to take your kids, and this isn’t even about whether children are property. This is about whether we as a society, expressing our collective will through our public institutions, including our government, have a right to impinge on individual freedoms in order to advance a common good. And that is exactly the fight that we have been having for a couple hundred years.

"Collective will," as promulgated by the state schools. Sort of like this: 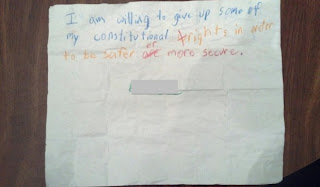 Robb over at Sharp asa Marble summed it up quite succinctly, "This is why I own guns."