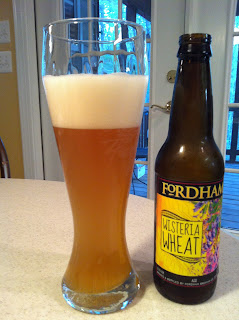 I had tentatively planned to hit the range after work earlier this week, but that trip was sidelined by a surprise late afternoon teleconference. (I need to reexamine that whole "Arrive early - Leave early" routine; the former works, the latter seems to fail frequently.) So it was time for plan B, let's taste another new beer.

Not long ago I received a few bottles of Fordham Brewery Wisteria Wheat from the brewery. I was happy they generously sent three bottles so I could share. I'm not a big Hefeweizen fan, but Colleen and "Checkered Flag" definitely are, so I appreciated their impressions too.

At Colleen's request we dusted off the tall Hefeweizen glasses, even though they hold much more than 12 ounces. It took a hard pour to build up a moderate head over an unfiltered, hazy orange beer. The foam was not persistent and dropped rapidly. The expected mix of banana and light spices came through in the aroma. The flavor followed suit with a strong sweet banana and yeast flavor. A hint of tartness comes through at the end. The finish is dry and very clean. Very little aftertaste is left behind on the palate. A moderate carbonation, mild flavor and just 5.1% ABV, made for a refreshing pre-dinner drink.

My tasting companions said they enjoyed the Wisteria Wheat very much. "Checkered Flag" pointed out that he finished his glass before the rest of us. That's not the usual order of drinking speed around here. However, given that wheat beer was one of our friend's gateway beers, that's not surprising.

I was still disappointed to miss out on shooting, however the fun of trying out a new beer with the same folks I hoped to have been shooting with was certainly an acceptable alternative.